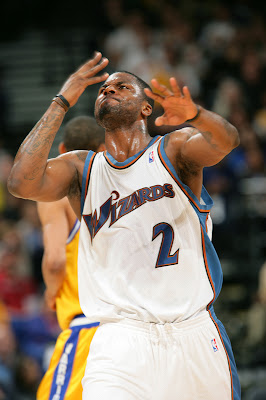 "This is a man's league and he is man. In the dictionary next to that word there
is a picture of DeShawn Stevenson."

The Washington Wizards are collectively waving their hands across their faces in tribute to DeShawn Stevenson's time-expiring, curse-lifting, Steve Buckhantz-on-cue-taglining shot that sank what not only was one of the NBA's best teams, but also the idea that this team was doing anything even close to fading down the stretch.
With last season's final months looking to replicate itself over a longer stretch of this more promising season, the last few weeks of Wizards basketball had been something of a distressing time period. But with the Wiz winning three of their last five with one loss coming in overtime and the second coming as a result of David Stern-approved, Phil Knight-approved, Norby Williamson-approved game fixing, they seem to be in pretty good shape, despite missing their biggest guns for who knows how long.
The reason for this return to steady play, even against the league's best? The same reason the Hornets returned to their oh-so-superior Western Conference homelands with a crucial loss: DeShawn. Against the Bobcats on Saturday (aka, the atonement game), DeShawn hit three three-pointers in the waning fourth quarter moments to push the Wiz to another win over Michael Jordan's blunderfesting Bobcats. (The 'cats were once again without stat-mongering, Gilbert knee-kicking, overall jerk Gerald Wallace, whose absence from active action will always be cause to cheer.) The night before that, Stevenson was driving the lane hard in the waning seconds of ESPN's LeBron lovefest, drawing uncalled fouls that Stevenson's coddled counterpart LeBron draws without abandon from his friendly striped teammates on the other end of the court. (Of course, if LeBron didn't get his requisite preferential whistles, he might flash that oh-so-lame frustration face at the non-abiding officials. If only Gerald Wallace was stat-grabbing and knee-kicking against the Cavaliers this year.) Both of these strong performances lead to last night's career-high achieving heroics, taking what was once a 15-point second-half deficit and turning it into awe-inspiration. DeShawn was driving to the hoop drawing contact, hitting lay-ups, going 7-for-7 from the line in addition to unleashing the "Apropros Dagger" Steve Buckhantz had been just dying to expound upon this season.
What a fantastic moment, which, as per usual, was a result of questionable officiating. While Hilton Armstrong was attempting to permanently affix goat-status to himself for his waning seconds foul on DeShawn (unbelievably called in the Wizards favor, after another unbelievable charge was called in Brendan Haywood's favor two possessions earlier) by missing two crucial free throws, the refs decided Antawn Jamison, and not not-possible-er Morris Peterson violated the lane, giving Hilton (insert Kornheiser-approved Paris Hilton joke) Armstrong another chance to sink a ref-abbetted third freebee and tie the score, which he did.
But that slight lead to glory. DeShawn, noting the lack of timeouts in a non-Webber-like fashion, drove the lane, crucially crossed up Peja Stojakovic, slipped to the edge of the three point line, rose high with his reaching-for-the-lightbulb release and unleashed the dagger. Just like that the Wizards supposed tailspin came to a halt. The playoff picture remains as bright as Oleksiy Pecherov's skin tone (BTW: who didn't love the way he was just hugging everything in sight after the game winner?). No Caron, no Gilbert, no Etan, no problem.

Posted by Bobtimist Prime at 9:08 AM

this was a great game!