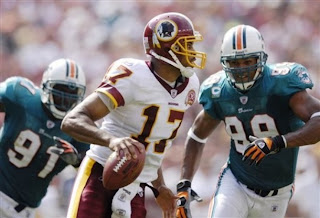 How many naysayers did you encounter after this weekend? How many told you Jason Taylor (#99, pictured, in a scene never to be repeated again) was “past his prime”, that he would be “invisible” this year on defense? That this windfall of the elite defensive pass-rusher the Redskins have “lacked” for so long was nothing more than another “mortgaging” of draft picks? A few such naysayers voiced thief opinions to DCO headquarters (email account).

Of course, this is all nonsense. The trade, of course, is a stroke of brilliance, even if it were born of semi desperation. Plus, it’s nothing like the star-grabbing, true future-mortgaging, draft-disrespecting strategies that may have occupied these parts in years past. Those days were officially put to rest in the refusal to overpay for Lance Briggs. No, this addressed a true need, one that was “ignored” in the draft, bemoaned the second-guessers. With Phillip Daniels and his backup down for the season (first day of training camp; first day of training camp), something had to be done, and the loss of a couple of draft picks for a guy who piled up 11 sacks last year was the right price. Yes, 11 sacks. How can that be “past his prime”? It’s even a prime number, for the love of ‘tism! Maybe ‘skins fans have just been hurt too much by prime in the past.

Here’s a number that won’t be prime: the number of insufferable “Dancing With the Stars” references this season. Mike Wise kicked us off nicely in that regard (we cringe to think of any Chris Berman coverage of the Redskins in the coming months). Though the next day he did reward us with a almost embarrassingly gushy piece about Taylor that reminded us again of his remarkable turn from chief optimism-hater to embracer of all things ‘tism. Fans apparently share the optimism, as evidenced by the poll showing 74% expect to see 8 or more sacks from him this season. With he and Andre Carter bookending the line, it would not be surprising to see 20 sacks off the ends this fall/winter.

It had to be done. The ‘skins rescued Taylor from the perma-frown clutches of Bill Parcells. He has responded in kind, lending credence to V. Cerrato’s prophecy that Taylor would play more than one year. Prime years they will be indeed.