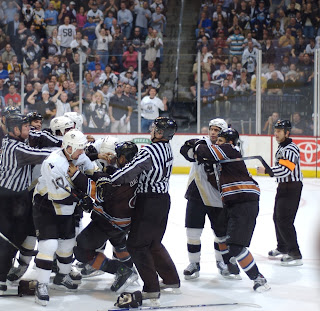 Capitals win 2 of 3 periods during a night of touching tributes
The Capitals and their fans shared another fulfilling evening together last night, winning the first period against the Pittsburgh Penguins, 2-1, and taking the third as well, 1-0. The only setback of the evening was the middle frame, which the Capitals lost, 3-0. Taking two out of the three periods no doubt blunted the disappointment of the 4-3 final score which, like the popular vote in a Presidential election, means nothing.
The ending tally was made further irrelevant by the Caps tribute to a young man who rushed into a burning building to save two of his friends, as well as the Netstar 1 - sponsored salute to the troops in attendance. There was also a lovely moment where Capitals and Penguins fans put aside their differences to wish the Georgetown Hoyas well in their upcoming Final Four matchup against the mutually loathed Ohio State Buckeyes.
Only the most hardened fair-weather fan could have walked away from Verizon Center last night feeling anything but ebullient.