Montreal: le Benefactors (or whatever)

Now that some of the anger has died down north of the border in the wake of the Capitals’ thieving acquisition of Cristobal Huet from the Canadiens, we at DCO feel it is time we finally thanked the city of Montreal for the many gifts it has bestowed upon us in Washington over the years. Let’s take a look at a representative sample.

1775: American forces, as ordered by George Washington, capture the island of Montreal in the same way that a Washingtonian of a different kind, Alex Ovechkin, would capture the hearts and wild imaginations of the city of Montreal 232 years later. This obviously has nothing to do with sports, but it’s an interesting intellectual stretch, wouldn’t you say? We almost had us a 14th province named Canada. Wouldn’t that have been something. But anyway…

1982: A big one. Rod Langway, Craig Laughlin, Doug Jarvis, and Brian Engblom are bestowed upon DC in exchange for the forgettable Rick Green and only slightly less forgettable Ryan Walter. Langway of course became the Capitals most famous member, grabbing a couple of Norris trophies and bringing a scent of respectability to the Caps, in the form of many consecutive playoff appearances, after years of expansion team frustration. Jarvis also went on to grab great recognition in the form of a Selke Trophy (soon to be renamed the Quintin Laing Shot-Blockin’ Trophy).
Craig Laughlin: well, where would Washington hockey be without him? How much poorer would we all be having never heard a player was “ka-bonged” or pulled off a “dipsey-do” or that a game was “donesy”. Who else could ever convince us that 100 points in 150 games equaled “about a point per game”. Where would play-by-play maestro Joe Beninati be without Craig? Not pulling that plum Bruno Cipriani commercial, that’s for sure.

1992: The Canadiens sign Donald Brashear, giving him his break in the NHL, leading to his inevitable landing in Washington and ultimate complete pummeling of hapless Montreal forward Aaron Downey on December 27, 2006 (below), one of the better hockey fights I have witnessed in person. 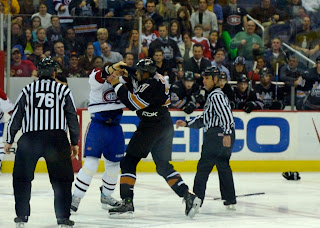 We’ll make the assumption that the humiliation contributed to Downey leaving town for Detroit the very next season.

2001: Montreal sends Washington Trevor Linden, Dainius Zubrus, and a second round pick in exchange for perennial disappointment Jan Bulis, Richard Zednik, and a first round pick. Linden never quite worked out, though the Caps were able to recoup that first-round pick by shipping him to Vancouver. Call it a wash. Though Zubrus never had the enormous breakout season we all hoped for, he was enough of a versatile catalyst on Jagr, Bondra, and Ovechkin lines to make this trade another reason to thank Montreal for their contribution.

2005: A non-hockey move! Expos to DC to become the Nationals! At last this Major League Baseball team went to a market that deserved one. That is, the proper “stage”. Am I right, Montreal media? Don’t know what happened to that ridiculous mascot, but I’ll make the wager that Screech’s natural predatory instincts got the best of him at some point. Sure, the team is still a bit of a work in progress, but when that parade is going down Pennsylvania Avenue, let’s not forget to, again, thank Montreal and their indifference for making it all possible.

2008: A #1 goalie. Fan reaction in this instance tells you all you need to know. Too bad for the Canadiens this move wasn’t telegraphed like the potential Redskins’ hiring of Jim Fassel or it might have been likewise prevented. Now the Caps have one less weakness for message board moaners to, um, moan about (time to rekindle the “why isn’t Mike Green locked up for 15 years yet?” complaint I guess). Huet is a good old fashioned robbery (especially if he’s re-signed) at the cost of the second round pick acquired via Brian Sutherby. Much as this essentially free goalie fell into the collective lap of the Caps, an essentially free ticket to last night’s game fell into my singular lap. I was pleased to see at least one fan had improvised a Huet jersey using masking tape on the back of the Caps’ home red. This expression of team pride helped purge the taste of bile from my mouth brought on by the tool wearing a ridiculous-looking Sidney-Crosby-jersey-and-black-turtleneck combo, and the insufferable (yet inevitably found, unfortunately) ass in a Cowboys’ hat and jersey.

So thank you, Montreal, for the above transactions that have benefited sports (and possibly history) in our town. We look forward to working with you again. Is anyone on the Alouettes available by any chance?

Youppi was sold to the Habs.

One bad thing Montreal sent us -- Calvin Griffith, who moved the Senators to Minnesota.

eBay or other comparable auction websites are great places to find amazing deals on your favorite Coach Outlet
and handbags. It is important to note, though, that there are some shady sellers out there that can't be trusted. Those who know will tell you that there are numerous sellers out there trying to sell Coach Wristlet
to unwary clients.
Please do not let yourself be one of those that are fooled by these Coach Ergo
. Fortunately, there are several ways to effortlessly spot knockoffs. If you know what to look for, you will be able to spot a fake every time.
Watch out for any one who has a bunch of the same bag for sale There are sites that sell the phony Coach Poppy
for a discount in high volume and dishonest sellers often buy from these places so they have many of the same purses.