Honoring One GM, Awaiting the Latest Brilliance of Another

As mentioned in the most positive DC-sports-related twitter feed available on the right, we at DCO salute recently departed Nationals’ general manager Jim Bowden, he who literally put his own health aside to tend to this fledgling franchise, and hope that when the Nationals reach their full potential he is recognized for his role in assembling this team.

No team-assembling action is closer to this blog’s heart, of course, than Bowden’s hiring of this man: 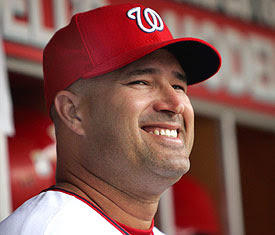 Manny may ultimately be the legacy of Jim Bowden, in the way Bobby Beathard gave us Joe Gibbs. The Master of ‘Tism is DCO’s spiritual inspiration, reminding us all that the power of optimism can accomplish things as great as keeping a lowly regarded and injury riddled 2007 team from plummeting to the depths of historical badness, to things as subtle as helping alleged malcontents like Elijah Dukes become true MLB superstars someday. Federal investigations aside, Bowden has left us this lasting gift.

The silence is typically overwhelming this time around. What difference maker(s) will be had for a song (perhaps the controversial “hockey song”?) either today or tomorrow? We've already seen one Verizon Center team exercise good trade deadline judgment. Is there any doubt the Caps will follow suit?

The design is 40's inspired and comes with a 38mm case, while the Navitimer World is one of Breitling
's largest watches ever made, measuring 10% bigger than the Navitimer. The Bentley Motors
for Bentley collection is a self explanatory collaboration between two of the most renowned brands within their respective industries. Some of the less popular Bentley Motors T
collections (among the general populace at least) seem to be the Aeromarine Avenger and Colt ones as well as the Professional Skyracer. Since all Navitimer Watches
really are "instruments for professionals" they focus more on the functionality of the watch versus the look and when you first look at these collections.