Another Reason for Celebrating the 4th 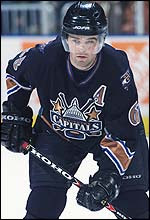 The actual vote for independence from Britain came from Congress on July 2, 1776, though we celebrate this glorious freedom on July 4, the date on the Declaration. Let’s apply (stretch??) this to the NHL and in particular our nation’s Capitals. While we Caps fans may trace our team’s independence from the shackles of Jaromir Jagr’s contract to the May 5th realization he would not win the Conn Smythe and therefore become an unrestricted free agent, it is also possible that henceforth we will celebrate freedom along with the rest of the nation on July 4. For on this day, we see the once-and-always moody Czech officially leave the NHL, bound for Russia.

No more paying his contract. No more watching him (briefly) play better and seemingly more inspired on another team. No more rumors of a nightmare return to Pittsburgh. No more having to remember to boo him every time he touches the puck. No more Jagr. Independence!

Free from such tyranny, the Caps have extra salary to pay to those who deserve it. A hard worker like Brooks Laich; a rising Orr-ish defenseman like Mike Green; a crafty and still-skilled veteran leader like Sergei Fedorov. The list goes on, and will positively affect this franchise for years to come. All this thanks to blessed release from the oppression that was the deal sending Jagr to the Rangers, wherin a Washington franchise, desperate to slip the bonds of an ineffective and overpaid winger, agreed to subsidize his canoodling in New York, forcing years of wasted salary.

Thus, every year hence, while we’re lighting our snakes and sparklers on 4 July, let us remember Avangard Omsk along with the Second Continental Congress as enablers of our freedom.