Rooting for the Home Team Guilt-Free 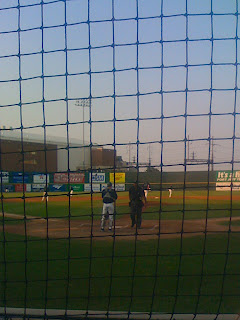 Back in April, when Mrs. DCO and I moved to SE Connecticut, I vowed to continue to root for my beloved DC teams and to forsake all NY-area teams as the enemies they have always been. I’ve maintained that healthy and natural animosity, spurning the advances of friends trying to convince me to adopt the Yankees, Mets, Giants, etc. as my new teams. Those franchises remain unpalatable to me.

I have found, however, an exception in the non-MLB-affiliated minor league Bridgeport Bluefish. The physical proximity of this team and it’s complete lack of relationship with any team that would ever play the Nationals make it the perfect adopted team to root for, completely guilt free. No feelings that I am betraying in any way my loyalties back in my boyhood home.

Last night was my first experience seeing the Bluefish play, and my first in-person baseball experience since mid-April when my only trip to Nationals Park resulted in witnessing an ugly drubbing handed out by the Marlins. Bridgeport’s game against the Newark Bears, though in name and stature nothing akin to a major-league game, nonetheless presented striking and eerie parallels to watching the Nats play (one thing presenting absolutely no parallel: our $14 tickets two rows behind home plate).

First, there were a healthy number of errors, which would make any Nats fan feel at home. A total of six (three by each side). A bit ahead of the pace of what we might see any given night at Nationals Park, but somewhat reminiscent of home. Second, the Fish’s fine third baseman (still trying to learn names) pulled off a fine Zimmerman-ish backhanded snag down the baseline/firing perfect of strike to get the out at first. Very nice. Third, as if to personally remind me of the wonders of attending a Nats’ game with Phillies’ fans, some loudmouth backers of the Bears sat just a few rows behind. “Eeeeeeeeveryone gets a hit! Wwwooooooooooo!” This every time Newark got on base, becoming progressively more slurred and insistent as the game wore on.

Finally, perhaps most endearing and most brining me back to DC was the ending. A Bluefish 8-2 lead in the 7th inning shrank to 9-6 by the top of the 9th, by which point Newark had loaded the bases with two outs. With the closer struggling, another pitcher came in to throw three strikes to end the game, mercifully ceasing a very long top of the 9th, and ending an exciting, suspenseful contest that until that inning had been a blowout. Ahhhhhh, that takes me back.

The Fish play next door to an arena housing another local minor league team: the American Hockey League’s Sound Tigers. This presents a more complex situation than the straightforward no-problem-to-root-for-them non-conundrum of the Bluefish. The Sound Tigers are, unfortunately, affiliated with an NHL (that is, potentially Capitals-competing) team: the Islanders. While not as gaggingly awful as a partner of the Penguins or Flyers or even Rangers, it’s still potentially distasteful to root for a group of AHLers that could possibly one day threaten the Caps’ coming dominance of the Eastern Conference. I’ll likely end up pulling for them anyway, just to get in a live hockey fix this fall that cannot be completely satisfied by the Center Ice package. I will simply root for the Tigers to send out a team of career AHL players every night (a squad full of Frederic Cassivis), and when the Hershey Bears come to town, all loyalties to Bridgeport are out the window. There you go. Proper traditional loyalties maintained, new loyalties justified.