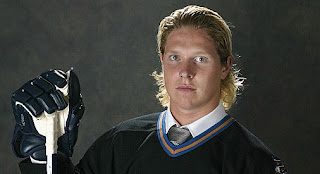 That's Swedish (roughly, according to some online dictionaries) for "piece of the puzzle", and that is precisely what the Washington Capitals secured yesterday. Center Nicklas Backstrom, big-time scorer and phenom from the Swedish League, will join the Caps next year in the NHL. Marvelous. It was widely bemoaned that Backstrom was not in Washington this past year, but in retrospect that is a good thing. Having Backstrom last year would not have made the Caps that much better and would only have counted a year towards his free agent elligibility. Now, DCO believes, a slightly older and more seasoned Backstrom is a step towards propelling the Caps to greatness.

Time to look again to the offseason, and the acquisition of a quality defenseman and at least one of the following: a top-line center, another quality defenseman, a scoring wing. Regarding the top-line center, DCO re-emphasizes its insistence that this player NOT be Daniel Briere (aka, King of the Groin-Spearing Tools, soon-to-be-aka King of the Eliminated From the Playoffs Before Their Hockey-Media-Mandated Stanley Cup Championship Tools). Several commentators on Capitals Insider have similarly expressed their distaste for "Mr" Briere's cowardly spear-centric play, and we encourage all, especially Caps' management, to read. Please, Ted, George, et al, by all means make a play for Chris Drury or Scott Gomez, but not this idiot.

But back to the positive. Having Backstrom here next season will be huge. Add a few more players to a fast-maturing set of youngsters, and big things will happen. Keep an eye on guys like Boyd Gordon (who could be primed for a breakout year as a shut-down checking center) and Matt Pettinger (25-goal scorer if he stays healthy). They are former first round picks who may finally be showing some real promise.

What's that you say, it's too early for predictions for next season? Nonsense. How's this: Caps will make the playoffs as no lower than the 6th seed. We're as sure of that as we are that the Nats will not lose 100 games. Put it in the book.