We here at the DC Optimist are big fans of the washingtonpost.com's pitch-by-pitch coverage of the Nats. Of course it doesn't compare to MASN's TV coverage, which features some great Chad Cordero commercials ("Lights out, Grandma!"), the twangy pompousness of Don Sutton and the intensely bright-eyed 'tism that continuously flows from Bobby Carpenter's microphone. But it does contain one heck of a technological advantage. Yes, the Win Probability chart. 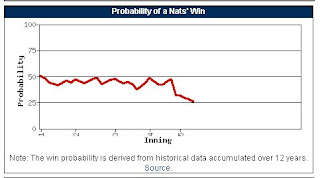 This brilliant piece of theorhetical-mathematical-sabremetrical goodiness updates itself every inning showing just how likely the Nats will not win the game. As statistical, mathematical, and above all predictive whizes ourselves, we have applied this brilliant piece of technology to the remaining buzzing sports stories, mostly in an effort to prod the Post into including the meter on all of their stories. Here's a few Win Probability scenerios we have concocted:

Brendan Haywood, in an effort to mimic the sensibilities of his homeboy Kwame Brown, has requested a trade. In the Wizards' glorious past, guys who were a bit tough to motivate usually went on to star in another city. One of the cities that has benefitted the most from tough-to-motivate Wizards has been Detroit. The Pistons' starting five features three ex-Wiz and they are on their way to the Eastern Motors Finals. So its only right that Haywood would find a home in the city where reminiscing about the wonder years in DC makes for great newspaper reporting. So how likely is it that Haywood will take his new position in the Pistons lineup and turn himself into the consistent-contributor we all hoped and dreamed for? 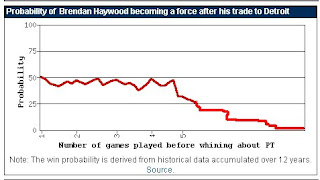 According to our probability meter, not very likely. Sure it's easy to sit on a bench with non-defenders and complain about PT, but with actual two-wayers in Detroit and noted alpha dogs like Sheed Wallace and Chauncey Billups manning the locker room, Brendan will likely cower to the end of the bench with counterpart Nazi Mohammed.

The Redskins started their annual Optional Training Activities (ne OTAs) yesterday, and in practice sessions closed to the public, players both healthy and recovering gathered to do... something. Although the media folks were not allowed inside, that didn't stop the Washington Post from muckraking regarding the absence of star d-backs Sean Taylor and Shawn Springs. Instead of sending in a microphone-wielding hottie like Kelly Johnson to get the puffy scoops like Snyder-homies Comcast Sportsnet does, the Post has, again, decided to dwell on the negatives. After careful consideration, we decided to apply the Win Probability to this scenario: 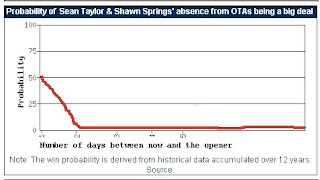 As you can see, the whole scenario reeks of nothing. But just to make sure, we applied the science to the post's impending coverage: 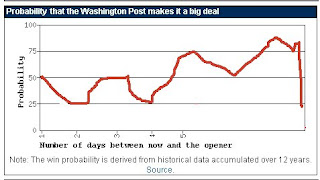 And finally, with Mike Wise not having the depleted Wiz bunch to kick around anymore, the Post sent him off to interview one of his good buddies and current ressurection specialist in Golden State, coach Don Nelson. In a column that blindly reaches for more racially motivated thingies than a Michael Wilbon trade paperback, Wise attempts to "pun-up" his piece in regards to the Warriors sensibilities.

Besides being a woefully dated pun that caused a near-vomitous shock reaction in me, the pun does not take into account the fact that Nelly, he of the Super Bowl dual-jersey performance and the *shudder* Tim McGraw collaboration, has absolutely no street cred whatsoever. Because of this, we have applied our Win Probability to Wise's street cred, and here's what it read out: 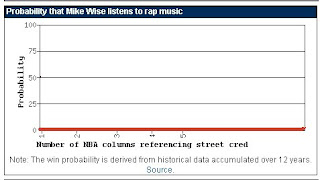 Posted by Bobtimist Prime at 2:48 PM

The link in the piece about Brenda requesting a trade goes to a story about the Nats. Bad link? Or did you just make the request part up? No biggie if you did, as we all expect it anyway so it's not much of a stretch.

The Wise bit is pure win.

It could have either been a bad link that has since been rectified or a delicious metaphor linking Brendan's game four output to the Nationals bats when runners are in scoring position.

Like Breitling Watches
also is launching a new version of an older watch, but this time, it does something the older version never did, nor can any other watch in the world do. Timepieces that are as spectacular as Breitling Aeromarine
are not designed exclusively for few famous stars and big shots in the corporation world. With Breitling Windrider
you can still experience the luxury of original timepieces at minimum cost. Also you can gift these gorgeous timepieces to your beloved one, your friend, or your family members. The receivers will definitely adore the perfection of these Bentley 6.75
.