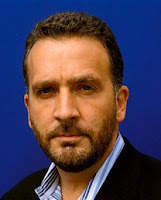 With the Nats bludgeoning the Orioles this week in Charm City, the DC Optimist sought perspective from a passionnate, historically in-tune, and violently brilliant writer for this 95-north-based battle; a writer that both understands the local scene, and can provide awesome descriptions of bludgeoning. Who better than crime novellist-slash-television and film producer George P. Pelecanos, the District's most knowledgeable and consistent voice of the streets. Pelecanos's crime novels have exposed a side of DC's underbelly that is rarely looked at by Barbara Harrison, and when he isn't sending Private Investigator Derek Strange off to shove knives in racist drug runners' necks, he is penning some of the best episodes of the best television show ever based in Baltimore, The Wire. His recount of Felipe Lopez's brilliance last night in the 11th inning is below:

Posted by Bobtimist Prime at 9:59 AM