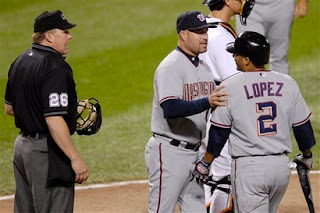 Again, six runs scored with two outs. Again, double digit hits. Another nice start from Matt Chico. But what may be flying slightly under the radar here is the continual maturing of Manny Acta as a legitimate big-league manager.

What Man Act has done with this team is already noteworthy, and he should garner at the very least consideration for Manager of the Year. Last night he again showed he is not afraid to leave the dugout to have a friendly discussion with an umpire, and he put on a nice show of "calm down" with Felipe Lopez when the struggling second baseman disputed a called strike in the 11th. Acta knew they couldn't afford having Felipe tossed with two outs and the bases loaded in a tie game, even with his .230 batting average and 0-5 performance up to that point. What did ChairManny say? We don't know. "[spoke] a little Spanish," is all he revealed.

Whether he spoke Spanish, English, or any other language is irrelevant, for we all know by now that Manny speaks the more important univeral language of 'Tism. What else but a good dose of this language of eternal optimism could have pulled Felipe back from the brink, and inspired him to, two pitches after the dispute, sneak a tricky shot down the first base line for a base-clearing triple? What else could have kept the dugout together after a pair of late-inning leads evaporated and the Ballmer faithful smelled blood?

Let's also not forget the heroics of the overlooked Robert Fick and Ryan Langerhans. Fick's single in the 11th started it all (he played some nice defense, too), which Langerhans followed with a walk (a nice homer in the 5th, too), leading to Christian Guzman's walk and Felipe's redemption.

Now the Nats look for a win tonight that can fulfill three laudable accomplishments: a series sweep; a season series win; a tie with Ballmer in the standings. Yes, the team that drastically cut salary to win in the future is but a victory away from matching the team that went on a baffling spending spree in a half-assed attempt to win now.

A cobbled-together starting rotation putting forth solid effort after solid effort (with healthy arms on the way)? A roster full of hitters with potential that is finding its stride? A rookie manager coming into his own, one who has the full confidence and respect of his team and who relentelssly preaches 'tism, regardless of the odds or situation? That all equals Big Winner, maybe just in 70-75 games this year, but in a whole lot more down the road.