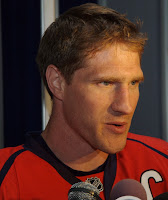 It's a day late, but we nevertheless present this Manny Acta Optimist of the Week award to Capitals' captain Chris Clark. Besides showing his dedication to the "other plan" in town by re-upping for three years, Clark vocalized his foresight and bubbling optimism by saying "I like where I am right now. I like the organization. I love the area."

Clark's attitude flies in the face (again) of the optimism-hating perception that "nobody wants to play for the Capitals." Just as the Michael Nylander DC-is-way-better-than-Edmonton situation showed, players coming off career years do want to play here. Clark could have walked after next year and had his soul purchased by the blackened hearts in Philly or New York, but he chose to stay. There may yet be hope that traditional team-building will win the day over the elite-player-grabbing-and-overpaying that is more and more becoming a strategy in the NHL (salary "caps" notwithstanding).

We are also exuberant about Clark's re-signing for more selfish reasons. The extension presents us with three extra years of opportunities to pose pressing questions to the benevolent captain, who seemed to genuinely enjoy his brief chat with our own Bobtimist Prime at last month's uniform unveiling. There's plenty more where that came from, Chris. We're glad you're sticking around for it.

our series starts tuesday brother...what do you think?