Recognizing Dmitri (and others) 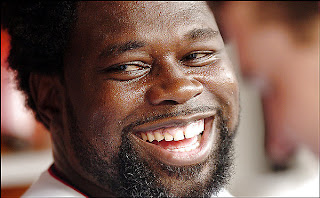 Throughout this occasionally glorious baseball season, we had eagerly anticipated someone taking down Dmitri Young's incredible story, knowing that his "troubles" in the past and his redemption via bat swinging was the type of stuff that gives misty eyed Field of Dreams-watchers chubbies. But no one had stepped to the plate yet, not while he was in the major's top five in hitting, not during his also-sort-of-troubled-brother's breakout year, and not immediately after he was selected to his second all star team. We anxiously waited while premature Guzman redemption stories were printed, while Manny's glorious attitude was detailed, while Zimmerman breakouts were anticipated, while bargain bin pitchers' second, third and umpteenth chances were looked upon, but there was nothing of this majestic comeback story. ESPN was busy with their yearly puff pieces about heroic athletes spending a day shepherding around a disease survivor neglecting to mention Dmitri's greatness when a promotional tie-in wasn't readily available (putting him on the Budweiser Hot Seat would be a little classless, no?).
Finally the post and Barry Svlurga came through on Sunday, delivering a multi-paged, multi-photoed, and multi-sourced piece that featured Dmitri's well-deserved grin spread across the sports page. While some golf tournament with some dude seemed to be the highlight of the local sports scene all week, we thought that it was fitting for this story, which likely wrote itself (even if, as Dmitri said, "you don't have enough paper") to gain its rightful prevalence. There are a few other stories brewing in the local sports landscape that we feel need to be explored, and they are listed below.

1. Adam Archuleta's workout tape. According to the promotional website, "As you master these beginning exercises, you too will realize dramatic improvements in strength, speed and explosiveness and be on your way to reaching your ultimate athletic potential!" Early reviews say that while the exercises look nice and can deliver some nice results, they often leave you in the wrong position. The tape is incredibly expensive as well.

2. Anthony Anderson's prodigious Clinton Portis jersey and matching Redskins laniard worn throughout hollywood blockbuster, Transformers. Speaking of product tie-ins, enter the Danny's latest. Every great Hollywood movie needs actual authentic branding to slip product choice influencers into our youth's maleable brand loyalty tendencies, why not include one from the most valuable sports franchise this side of the Atlantic? There is no doubt that Snyder saw paralells between the skins and this overdone, overglossed, overpriced flick about toys that were better and more popular in the eighties. Could the skins be in the midst of their own big budget transformation? Are they ever not?

3. Oleksiy Pecherov "boxing out" Harvey Grant for an imaginary rebound. There is an imaginary post battle that I never want to imagine even if the hustle was implied (The whole "Man this guy has some size" quote is also disturbing). Sure we are all excited about the 7-footer's development with the regression of other 7-footers on the roster and all, but I don't know if I need those kind of hustle details. The fact that Pecherov looks more and more like a psychopath with every bloodshot-eyed photo doesn't help.
4. Jason Simontacchi's "reason for optimism." Just because.

Posted by Bobtimist Prime at 10:42 AM