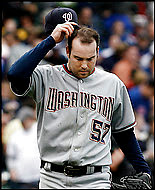 Sure, we could have gone the obvious route, again choosing our mascot/inspiration/savior/friend whose umpteenth 'Tism profile (this time in the Post), seems to follow the path beaten by a certain optimism-themed web-blog, (with the paper again neglecting the rightful percentage owed to us). We could have blah blah blahed again about Manny and his "successories collection" and his motivational attitude and how everyone in the organization has faith in his teachings as if he were the head of a red-colored revolutionary party that overthrew a corrupt dynasty system, spreading the good word to the downtrodden. But redundancy is not the reason we draw 50+ users a day (except on Fridays). No, the MAO of the Week feature is meant to spotlight optimism in areas that may be bereft of light, areas that may even be encased in the darkness of 'Tism-hating.
There hasn't been much baseball (of meaningful, or of the well-coached variety) this week leading to lots of reflecting over what has transpired so far in the 07, and one of our favorite season wrap ups so far has come from DCO homie Chris Needham over at Capitol Punishment whose half-way analysis is just dripping with 'Tism like sweat from Dmitri Young's prodigious nipples after legging out a triple. Anyone who reads Punishment on the reg knows that its a place where things can get a bit snippy in regards to management and their embrace of a legitimate team-building strategy. We wonder if the presence and ultimate influence of Manny has permeated Needham's MASN2-airing flatscreen and brightened up this oft-downtrodden Natosphere regular. The first recipient of lavish praise is the ChairManny himself:

"He's setting a positive example and isn't letting the players get down on
themselves, constantly teaching and keeping the team from getting down and
falling in on themselves."

We nodded our head steadily while reading as if we were Leo Mazzone watching Daniel Cabrera walk 9 batters on the way to not fullfilling his potential. We too love everything Manager Acta brings to the team (in the least redundant manner possible), and we are happy to see his influence reach all aspects of Nationals coverage. What would "Good thing number 2" be? Why none other than the Greatest Hitter of All Time Dmitri Young:

"What more can you say about what he's done on the field?"

Well I'm sure there are a couple of more posts we can eek out on his remarkable turnaround especially if he keeps lacing bases-loaded doubles like he's doing for Bergmann and his lack of stuff tonight. Of course the pending fruitless debate over whether or not to trade D'Meat Hook (designated the MVP by Needham) come next month ought to provoke more sayings. In our quest to keep Dmitri where he belongs it's good to see an ally in MAO veteran Tom Boswell instead of the alternative. I'm sure Needham feels similarly. And for good thing number three? Why tonight's bouncing back starter Bergmann, whose profile is, in Needham's eyes, almost as made-for-the-big-screen as Dmitri's:

"Bergmann needed to be in DC, with St. Claire over his shoulder and with Bowden
barking in front of him. Right place. Right time. And he has a future. Take any
individual piece of that away, and he's likely back in NJ teaching bored
children how to dissect frogs."

Well he certainly wouldn't be playing terribly for the Orioles, like most pitchers who arrive near the inner harbor, inhale its toxic fumes, and take in the disturbing blight that surrounds the area. We also love how Needham has stretched his 'Tism post to include "other things" including Matt Chico, Ronnie Belliard, and jokes about Jesus Colome! Bravo!

Posted by Bobtimist Prime at 8:19 PM

Labels: Nationals, OPTIMIST OF THE WEEK

Wow. I was that positive?

Must be hangover from the vacation!