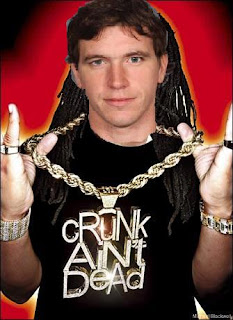 I know ATL-based Southern-fried crunk rap and French Canadian goalies are about as congruous as Tom Boswell attempting to interpret the lyrics to "Bend Ya Knees," but everytime I see the Cristobal Huet, he of seven straight W's, and nine of his last eleven, shut down a flopping Carolina Hurricane two-on-one (leading to a fitting Jordan Staal board-delivering that Staal, channelling Manu Ginobili, somehow found a way to flop into), I can't help but think of Youngbloodz' 1999 hit "U-Way" thus leading to its hook burrowing itself into my conscious. While I will temporarily justify the usage of the insufferable Journey get-drunken-white-girls-to-sing staple "Don't Stop Believing," as it is Nick Backstrom's favorite song according to Brooks Laich, I think the CapsMix2008 might be missing this gem (as it is missing pretty much all rap music). I implore you not to listen to this and want to hit the club (Verizon Center) and make the folks scream it.
Posted by Bobtimist Prime at 9:15 AM

What about "Shoot your shot" by Ugly Duckling? Surely this should be Ovie's theme song.

As for an Ovie song, I think Filter's "Hey Man, Nice Shot" would be perfect.