After days of watching the Nationals annoyingly play a prominent role in their postseason role, and after equal days loathing and then rooting for the same, the Mets and their by-now-insanity-struck fans are laid to rest. Putting aside the hyperbolic lunacy-laced commentary, to whom can we look for an appropriate reaction? Who will give us a true taste of the levelheaded New York fan dealing rationally with such disappointment? Who will provide us with reasonably thought-out commentary on what went awry and why? Three words: New York Post: 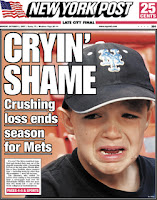 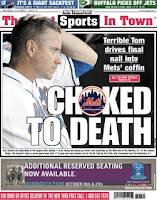 What do we see on the front page: a heartbroken child in a faded, crumpled Mets hat, sitting abandoned amongst empty seats, bawling as the “crushing loss” sets in. Who could be responsible for such a reprehensible act, one so heinous as to cause tears to flow from this youngster’s eyes even as he is left to fend for himself in a vacant Shea Stadium. A quick glance at the back page gives us our villain: Terrible Tom, the formerly venerable and very formerly New York-worshipped Tom Glavine, who we are told single-handedly drove the “final nail” in the Mets’ coffin. The inclusion of the Mets’ logo in the menacing “Choked to Death” header is a nice touch.

I’ve been mildly critical of the Washington Post in recent years for trying to make its headlines a little too cute (can any headline for a story about the Capitals and Lightning not contain the words “bottle” or “strike”?) and/or spectacular, even citing the NY Post as a possible inspiration. I take it all back.

Looking a little deeper into this issue, our old buddy Joel Sherman calls the Mets the worst NY chokers in 50 years. A gentleman states in the NYP’s touching-if-scathing eulogy: “We’re drinking all night. We have to be drinking all night.” Another fan provided further balanced perspective: “I’m on suicide watch. I’ve got nothing to live for.” Well-grounded individuals, both.

To be fair, many others voiced a desire to remain loyal to their team, and did not curse them when they had earned every reason to be cursed. Maybe there could be the genesis of a Mets Optimist in there. But not here. While the collapse of the Mets does give us a hint of joy, partially because of the way the Nats contributed to it, it is blunted by the harsh reality that Philadelphia benefited. Still, given that a worst-case scenario involved both the Mets and Phillies in the playoffs, things worked out ok.

Getting back to our usual optimism, what else can really be said of this Nationals’ season? They won more than anyone reasonably thought they could and played a prominent role in the NL East race. Who would have thought that Matt Chico would pitch worlds better than Tom Glavine (aka Terrible Tom) on the season’s biggest weekend? Further props to Chico for, on national television, bringing out the true fair-weather nature of Philadelphia's loyal fans, prompting them with his performance to boo their team and throw their stupid towels on the field after a close loss that still left them in the thick of the pennant race. Maybe it's another nail in that coffin (right, NYP?) of the ridiculous perception of the loyal-for-life Philly fan (granted, everyone has their fair-weather fans; they just do it much better than most). T-Boz gets it, sort of: "After all the pleasure the Phils have given them this summer, the crowd booed the seventh-inning shenanigans. And, after Chad Cordero worked a perfect ninth inning to secure Chico's win, the crowd literally threw in the towel. Out of the upper deck fluttered dozens of the white giveaways."

Lots of good stuff for the Nats, who closed out a convincingly winning September by again refusing to play down to expert expectations and roll over for those teams who smugly viewed them as nothing more than a lowly inconvenience to brush aside. Well done. Go Padres/Rockies.