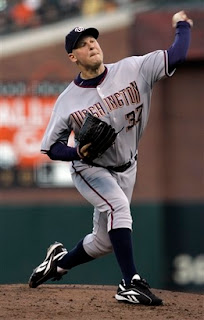 The Great Climb continued late last night, and those of us who missed the end of the game woke up this morning to see the Nationals and the Marlins with identical records as they wrestle for control of the coveted penultimate position in the NL East. We were also treated to a lovely box score with highlights such as Felipe Lopez, Austin Kearns, and Brian Schneider home runs, and a late-inning comeback by the Nats to steal the win.

In other, perhaps bigger news, Chris Schroder picked up his first career win, John Rauch reached 20 Holds, and Chard Cordero bounced back from the previous night's blown save to shut the Giants down in the 9th. Starting pitcher Mike Bacsik, despite walking away with a no-decision after five innings of work, unselfishly said afterwards, "I'm excited because we won the game." He also said, perhaps referring to the stunning way in which the Nationals have defied expectations this year and surged from 9-25 to fourth place, "Now I'm linked forever in baseball history to this achievement." Indeed. Finally, showing an admirable desire for constant self-improvement, Bacsik stated, "So now my next goal is to win 20 games and be an all-star like Al Downing." Best of luck, Mike.

Manny also got caught up in the moment, saying, perhaps also in reference to the continuing climb from despondency to fourth-place glory, "I kind of knew that it wasn't going to be an easy year for whoever was managing here with everything surrounding the history-making..." You've handled it well, Manny. He also said of Dmitri Young, who was nice enough to heap some random praise on Ken Griffey Jr. after the game, "He's legit. He's a good guy." He sure is.

Felipe Lopez, who we feared might have been the next starter to visit the disabled list because of a minor injury earlier this week, was clearly thrilled to just be playing and to be part of this resurgence. In theory he could have been speaking of his dramatic third-inning home run that got the Nats on the board when he commented, "I had goosebumps. It was awesome." We feel the same way.

Now that the Marlins are reeled in (get it?), there are only the half-game-away Cardinals to catch before the longer climb to the upper half of the NL, that golden land filled with Contenders and falling Pretenders.