As a former resident and permanent hater of the city of Philadelphia, I feel the need to check in on the city's various shortcomings through the fantastic free paper Philadelphia Weekly. In addtion to providing copious LOLs via Atheist British arse Steven Wells, PW features a lovingly viscious weekly comic strip by Jay Bevenour called "Hoagie Dip" that takes to task the city and its various happenings. With the city of brotherly love extending their affections towards recent DCO Hall of Famer John Lannan, we were pleasantly startled to find this rare nugget of 'tism being broadcast from that disparate metropolis north of us. Check out the third pannel of Bevenour's latest: 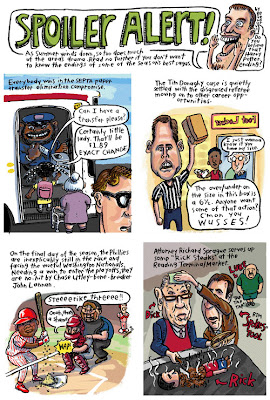 Many may think that this strip is another in the long line of self-deprecative, whoa-are-us humor stylings of Philadelphia Sports fans meant to elicit some sort of remorse for their sports miseries despite them being loutish jerks who pollute local sporting venues with vomit-colored jersey-wear. But the DC Optimist reads this not as humor, but as pertinent analysis of the Nationals' brilliant future-gazing and prospects-culling. We too see this sort of event occurring in the future for the brilliant Nats lefty who remains undefeated in his first three starts. His unprecedented ascent from single-A ball to the majors is a magnificent story in and of itself, and this type of recognition is to be expected.
The John Lannan wing of the yet-to-be-erected DC Optimist Hall of Fame building continues to grow. Next to an enlarged reproduction of this strip, the wing will feature video replays of the live Sportscenter interruptions of scheduled programming that broadcasted Barry Bonds failing in three plate appearances to register a home run against Lannan. We are also looking into obtaining Chase Utley's x-ray photos for an animated montage of his fate-full plunk.

Posted by Bobtimist Prime at 2:56 PM