Proven Wrong, Naysayers Try Another One

First off, was that really Tony Batista finally hitting one out last night? Next up on the getting-off-zero list: Nook Logan. We’ve been saying it for weeks. It’s going to happen. Tony can do it; Nook can too.
CORRECTION: Robert Fick has done it this very day.

The fact that the Nationals have lost five in a row, and six of their last seven, and 10 of their last 13, does not concern us. The point has already been made this season, and the road to <100 losses is wide open, as is the road to >71 wins. The team is undeniably on the right track. They’ve silenced the naysayers, or at least forced them to re-evaluate and, in some cases, repackage, their pre-season evaluations. They've defied expert logic. So every win from here on out is merely a nice bonus, not an absolute necessity (after win #63 anyway. Still plenty of time for that).

Looking at things even more positively, a little bit of losing brings any raging optimists in the braintrust back down to earth a little (but not raging optimist bloggers), and will encourage them to continue to pursue helpful, sensible additions to the club. It’s like that Tigers’ series we all remember so well: it serves notice that there is a little ways to go, that there are teams the Nats should aspire to be.

Back to the re-evaluating and repackaging of dismal preseason predictions for a moment. We’ve discussed the lame naysayer cop-out “How can a last-place team consider their season a success?” (again, the answer is: because they can, and they are still not in last place). Its bald-faced ass-covering is apparent enough for all to see, so it is hardly worth discussing. A new trend may be emerging, however. As this season has been above ridicule, there is evidence that naysayers are promoting the new argument: “Well, they’re going to stink next year.”

The essential crutch of this ridiculous burgeoning argument is the supposed lack of “quality free agents” available, or at least attainable (we also do not appreciate the sarcastic quote marks the referenced article places around “Plan”, as in, The Plan. As in, the brilliantly devised, contender-building Plan. As in, show some respect!). As if such demi-gods were a cruicial ingredient to a winning franchise. Quality free agents sure worked for that dominating Baltimore bullpen, didn’t it, hon? 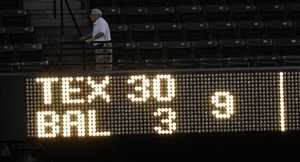 No, the point is that acquiring flashy free agents that “sell tickets” is not what The Plan (sans quotes) is all about. The Plan, with ‘Tism always as its guide, seeks those overlooked pieces, those Dmitri Youngs and Ronnie Belliards and Wily Mo Penas and finds in them the production to which the rest of MLB is blind. Combined with ludicrous quantities of up-and-coming quality pitching and home-grown instant-slugging-stars-to-be, it is plain to see why The Plan has no need for ill-advised, long-term, expensive contracts for soon-to-be-declining superstars. So what's next, naysayers? Are the Nats surely doomed when Ryan Zimmerman retires in 2027?

On another note, the lauding of Manny rightfully continues. Even if the recent slump callously pushes him out of contention for a still-well-deserved postseason award, what he is accomplishing here will not be forgotten. We won’t allow it.

So don’t worry about the recent losing. Everything’s going to be fine. Now and for a long time.
Posted by DC Optimist at 4:17 PM