"They Are Trying to Hurt Me, Danny!" 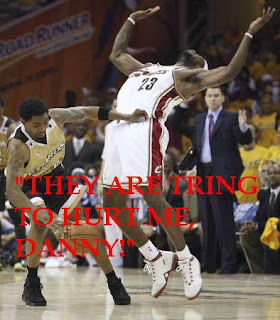 When not badmouthing Verizon Center bound, hopefully-white-clad faithfuls, Ivan Carter puts in the reporting god-work, as evidenced by his recent lip-reading of the intolerable douche-bag anointed one, providing the quote of the playoffs. Here's what IC wrote:

I'm no professional lip reader but I swear that after Brendan Haywood's hard
foul on LeBron James last night, James mouthed the words "They're trying to hurt
me Danny!" to referee Dan Crawford.

That is pretty much the most softest, manly-less display of basketball fakery in the history of men playing each other in non-soccer sports. Lebron, him with the grimmacing wincing "whoa-I-got-touched" facial expressions delivered whilst given another favorable whistle, is pleading to the NBA officials to throw the genial Brendan Haywood out of the game for causing what amounted to be a skinned elbow, just begging Dan Crawford to save him from the slight contact that playing in a basketball game might affront. Now I don't want to invoke Bobby Knight, really ever, but in this situation, I must. The General said during one of his numerous ESPN whore-sessions, "This is a game where kids get bloody noses, and broken arms..." I figured that this whole "playoff toughness" mentality that is supposed to be proving paramount according to those twinkling piano, zoomed-in-images NBA commercials would involve not literally crying to the officials about a team playing hard. As if Haywood's foul, one that pretty much 100% of Oakland Terrace Elementary School Saturday afternoon ballaz have experienced at least twice per game, was done to maliciously destroy that super important layer of skin that protects poor Lebron's precious shoving-0ff elbow.
Actions such as this need to hurl the 'militia into the throes of throatal response. Recent displays post-Caps games have been wondrous, and we need to apply the same amount of fracas-inducing attitude towards Mr. Shill. Chant's of "Man" Stevenson's "OVER-RATED" mantra need to be audible. Posters of the above image need to be visible. Resistance to Cleveland professional hackery need to be strongly reinforced. Referees need to be reminded that they do not work for Nike with "REF-YOU-SUCK"s. I want to not be able to feel my ears.

Posted by Bobtimist Prime at 12:03 PM

Truth About It said...

The Verizon crowd deserves to be ripped a new one for past transgressions.

The word for the '06 playoffs was "tepid" - I guess fans get second chances at redemption too.

Great words gmartin -- I think most of us had a knee jerk reaction to Coach handbags
Meyer's annoucement.. my heart was hurting for him; his family; not so much the school and football program but then reality set in and thoughts of Bob Stoops being our head Coach Bonnie
came into my head.. that is when it hit me... Coach Ergo
Meyer is leaving... to be our head Coach Gallery
no more..