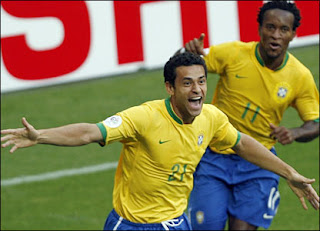 COMMERCE CITY, April 9 — In case you hadn't noticed, the greatest franchise in the history of Major League Soccer, DC United, began their annual blitzkrieg of the league Saturday in a friendly (that counted) against the Colorado Rapids in the icy, yet consumer-friendly confines of Commerce City, Colorado. It was obvious that the incredible draw of the league's historic juggernaut was used to open the brand new soccer-slash-equestrian-but-not-strip-club arena in Commerce City christened Dick's Sporting Goods Stadium, where cold weather, and unliveable thin air conditions lead the championship-bound United to fall 2-1 in front of 18,806 people, many of whom were legal immigrants.
Speaking of non-Americans, United plans on leaning on the contributions of two Brazillian newcomers Luciano Emilio and the awesomely named Fred. No, that wouldn't be the whiney puberty-challenged teenager Freddy Adu, who was sent to the boarding school-like confines of Chivas USA (based in Utah), where he will flounder, wishing he could again sip the majestic liquid from the MLS Cup. No, this Fred is a Brazillian midfielder acquired in the latest attempt for the fledgling America-based soccer league to gain international notoriety. Given free-reign to sign a foreigner, United balked on dumping cash on a washed up English hair model, instead rooting the dregs of superior countries for their spare parts. Thus, Fred, who was allowed to wear his singular name on the back of his jersey, like Yao, Ichiro or Nene, but not Jahidi, and is expected to do big things. The other Brazilian, Emilio, notched United's lone goal in Commerce City, his fifth since joining, which came at the 78th minute after United had problems with flanking, marking and other soccer-ings.
Next week United holds their home opener against the Kansas City Wizards, who are not missing their top two scorers with knee and hand injuries.

Posted by Bobtimist Prime at 3:46 PM