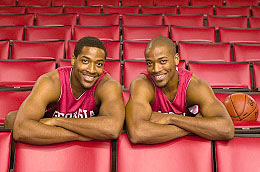 WASHINGTON, April 9 — The Washington Wizards continue their march to the postseason having played two extremely competitive games over the weekend. Most so-called sports professionals had deemed the Wizards unable to compete minus their two all-stars, but instead of forfeiting, as some cowardly, cut-and-running, bleeding-heart Al-qada-supporters might, the Wizards have welcomed the surge of support from a few guys that have been lurking on their bench and in their starting lineup remaining in the hunt in two games against playoff-bound opponents.

In an effort to make up for the missing 47.5 points per game the Wizards two all-stars routinely provided, Jarvis Hayes (!!!) has stepped to the front. Sporting a dazzling array of jumpshots, a few even going into the hole, Hayes has taken the opportunity that affronts an injury-decimated team and turned it into a positive looking to fool somebody into signing him into a new contract. Despite often being inneffective in most games, Hayes' play in Saturday's loss to the Nets was other-worldly. Scoring a career-high 29 points, hitting 5 threes and playing Wizards-brand defense on Vince Carter (46 points, also a career-high, but with more whining), Hayes sparkled, as opposed to clanking. Hayes' play has been noticed by team officials, who have included him in their latest playoff ticket commercial, no doubt appealing to the fans who Jarvis inspires every day.

Hayes' co-star in those advertisements, Antawn Jamison, or the big one, has been equally fastidious with his recent play, scoring 37 huge points in the meadowlands loss. By ignoring the need to body up his defender, instead concentrating on the offense that the Wizards really need, Jamison was again the dependable force he has established himself as throughout the years here, ultimately factoring into a game that got extremely tight in the final stages. Down three with three seconds remaining Jamison, Vince Carter's soon-to-be ex-brother-in-law, stroked a three from the top of the key, sending the game into overtime, where the Wizards were not rewarded a standings point.

The Wizards again match up with the Nets on Tuesday, although this time, away from the acres of browning grass and pollution-spewing McDonalds flavor factories of the barren wasteland off of the New Jersey turnpike. The Wizards couldn't manage to gain a victory in a land where human life cannot be sustained, but they shouldn't have that problem at the Verizon Center. Andray Blatche, the young, nubile 20-year old forward of whom everyone sees a striking Garnett-like resemblance, ought to log in more than the one minute of action he had against New Jersey, having just recovered from a knee sprain. The magic number remains at one.

In other news, no one is comparing Saturday's Washington area sporting events, in its endless audience-bludgeoning violence and despair to Grindhouse yet.

Posted by Bobtimist Prime at 9:56 AM