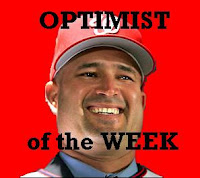 We present this week's Manny Acta Optimist of the Week Award (MAO of the Week) to Washington Post columnist Thomas Boswell, primarily for his convincing argument in today's paper that first-round draft picks (particularly high ones) are not only overrated, they are potentially dangerous. Thus, the Redskins' rekindled talks with the Chicago Bears regarding a trade for Bears LB Lance Briggs should not be dismissed out-of-hand as just more star-chasing by Washington management. It could be that trading the 6th pick overall for Briggs and the 31st pick overall is the very move the 'Skins need to make, if for no other reason than to save themselves from (A) Trading up to draft Calvin Johnson or (B) Drafting LaRon Landry at #6.

Our MAO of the Week goes on to examine the checkered history of high-first-rounders. He even, stunningly and again convincingly, implies a direct correlation between having no first round picks and Super Bowl success plus a high franchise financial value.

The pattern started here in '62, when the Redskins traded the draft rights to
the great Ernie Davis of Syracuse for Bobby Mitchell of the Browns. Mitchell
integrated the Redskins and has a bust in Canton. Davis died of leukemia and
never played in the NFL. Since then, the Redskins have become the most
valuable franchise in American sports.

How's that for a positive spin? The Redskins end their colorless history by dealing a (sorry) cancer? That deal with then-Browns owner Art Modell was so one-sided that the Browns, and Cleveland in general, have since been a bit unlucky both in the draft and on the field. Modell could only escape the ineptitude by packing up and nesting in ballmer.

Also, as noted previously by Boswell and this blog, Washington has shown a bit of increased maturity this season when it comes to signing free agents and making trades. While the notion of the Briggs trade may have seemed unwise at first, the 'Skins rejected an even unwiser counter-offer: sending second-year LB Rocky McIntosh to Chicago in the deal. This reversed a trend on giving up on developing players, perhaps prematurely (hi, Patrick Ramsey) in favor of overpaying for veterans.

Last week, Boswell, aided by obvious contributions from the DCO, convinced Washington that the Nats weren't the worst team of all time, and with the general optimism displayed in the locker room the Nats responded by winning...yesterday. We hope that Boswell's shiny columns will again be predictive of wonderful occurrances during tomorrow's draft.