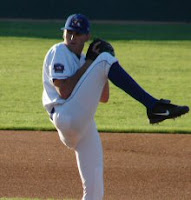 In the most inauspicious major league pitching debut of all time, Nationals rookie lefty John Lannan won over the hearts of us here at the DC Optimist with his gutty performance, already earning a bust in our soon-to-be-coveted DCO Hall of Fame. While the actual DCO Hall of Fame building has yet to be erected, and there have yet to be any other legitimate winners of this honor, we felt that a hall of fame commemoration needs to be created after his simply brilliant attacking of Philadelphia Phillies. Most of the time we simply reward our local superstars when their attitudes are just cheery enough to straddle the delicate balance of sportsfan sanity that is as shaky as crucial knee ligaments (why knee sprain!? WHY?!!). But this display of genuine hatred towards Philadelphians will forever hold a place in our hearts. We first were won over when the ferocious lefty plunked back-to-back Phillies, got (historically) thrown out and caused the first ever ejection of ChairManny. But when news reached us regarding the first-plunked Chase Utley's hand status being of the broken variety, our hearts found a permanent place for the kid.

Injuring Philadelphia superstars before crucial playoff crunch times is always reason to celebrate. Sure Jeremiah Trotter's two years in the burgandy and gold were quite hilarious with the untimely blitzes that cause 30-yard screen passes to Stephen Davis in the fourth quarter and the knee shreddings at Texas stadium, followed by the corny "homecoming" back to that decrepit metropolis where he resurrected his fading career. But while he was here he managed to injure running back Brian Westbrook prior the the Eagles' umpteenth playoff flameout. For that, Trotter will always be in our positive memories.

Maybe people think Dale Hunter's finished check on Pierre Turgeon was a black eye for both "La Petite Peste" and the NHL as a whole. Not us. Even if Turgeon wasn't a Flyer, injuring him prevented the Islanders from winning the cup. Hunter was able to end the Flyers season back in '88, unfortunately, only Ron Hextall's wavering confidence was injured.

Thus with Lannan, we already have an injuring moment we can savor. His eventual development into one of the top arms in the Nats stable is just icing on the cake, as was the rallying of Lannan's teammates in response and the Nats' eventual victory. There may be nay-sayers who in a very Philadelphian-like manner are hilariously hostile due to their insecure whiney nature and overall malaise of their hometown. For this, we are equally ecstatic.

Posted by Bobtimist Prime at 9:40 AM