Riggo: Redskin Legend and MAO of the Week (9-7) 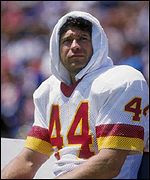 The endlessness of the week is starting to feel like one of those security lines at the entrance to FedEx Field, where you can pretty much finish a six pack before you are finally lightly frisked for weapons (hopefully with more effort than at RFK). The 'tism-aide has been quenching our thirst for optimism (as my DCO partner says: "It's got what fans crave"), but it is making me yearn for some Arena Drive face-melting gridlock, jinxed "IT'S THIIIIIIRD DOWN!" calls from Public Addresser Mark Kessler, endless walks up the hellish ramp to the 400 section and tired funky five dance routines. Never have I been so desperate to pay $8 for a beer in my life! Whilst the amount of 'tism-aide being ingested is not boding well for my bladder (meaning my anticipation, metaphorically speaking), it sure is going down easy, and providing us with another taste is none other than Redskins all-timer and now prominent radio host (granted, if the sun is still out), John Riggins.

Riggo, as if he were back in training camp acting a fool, has hit the airwaves with a bold declaration of the Redskins' potential record. Riggo is confident that the skins will completely reverse the tragedies of 5-11 and sew up the division with an 11-5 record! As for Joe Gibbs? Coach of the year! Being that, like most of the planet, I cannot hear ESPN XXXradio without having headphones hooked up to one of their three ham radio towers, I have culled this information from my homiez at extremeskins.com, where Riggo's big prediction was posted. This prediction may not be quite as bold as our pre-preseason prediction, but like Antwaan Randle-El's similarly profound prediction, it sees only the sky as the limit for this skins ball club. And why not get excited?

According to those stat-guys from Slate we profiled in yesterday's post, these skins are basically the Indianapolis Colts, who spent yesterday abusing softy-diver defensive back Jason David to the tune of 41 points. You may recall David as the guy who upon receiving a slight nudge of contact from diminutive dynamo receiver Santana Moss in last year's Colts suck-fest, violently threw himself to the ground in a very Varejao- or Jagr-like manner, drawing a personal foul flag. The DCO sees the scorching of this tool as great karmatic justice and we salute Peyton Marketing for handling him justly.

But back to Riggo's prediction: I am sure he can see the brilliance in how the team has been assembled, as we and others have. And his legendary brilliant past leaves no doubt of his strong mental capacity and penchant for intelligence. I can remember his pertinent analysis on old Redskins Reports where instead of a lame, passe boutineer, he would insert a stalk of celery into his jacket pocket, obviously a statement about fighting childhood obesity. Riggo's depth has even inspired brilliant blogs, like DCO homiez Sandy, Baby, who we will ride and/or die with after this post. So please, drink in the 'tism-aide, and hurry up in the men's room while your at it. If you shake it more than twice, you're playing with it.

Posted by Bobtimist Prime at 10:10 AM