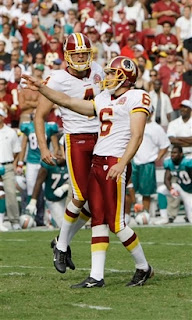 Redskins' placekicker Shaun Suisham has become the second official member of the DCO Hall of Fame, joining July inductee John Lannan of the Nationals. Not that they are the only members of this fledgling-yet-distinguished institution. There are numerous, and obvious, unofficial members, in the same way there are unofficially-retired-yet-still-honored Redskins' jersey numbers.

Lannan and Suisham, however, have caught our optimistic eyes with special achievements. Lannan wowed us with his bold rookie debut that featured inside-inside pitches against the Phillies, pitches which exposed the optimism-hating of a major league umpire and inspired his team to an important mid-summer victory. Suisham punched his DCO HOF ticket almost as early in his Redskins' career by connecting from 39 yards in OT to beat the Dolphins on Sunday. A perfect, down-the-middle, non-chip-shot-game-winning field goal, while a nice addition to any resume, would not necessarily be Hall-worthy on its own (see Novak, Nick). The accomplishment placed in context, however, reveals the importance (and reason for optimism) behind it.

Suisham has been nearly perfect (11 for 12) since coming to Washington after being dropped like a playoff snap to Tony Romo in Dallas. While the curmudgeons in Texas preferred their kickers crazy, the Redskins, perhaps starting their newfound trend of looking past big names, found yet another a kicker on which to stake their future. Much as the Nationals have found success with castoffs Dmitri Young, Ronnie Belliard, and Wily Mo Pena, the Skins have found their man behind the tee (and Derrick Frost's competent fingers) with Suisham.

No more having the indignity of carrying two kickers on the roster: one for kick-offs (anothe Suisham strength, save the pop-up to the 20 on Sunday) and one for field goals. No more Jose Cortez, John Hall, Brett Conway, Eddie Murray, etc. Remember the Michael Husted era? Remember the overtime game in 2000 against the Bucs when Norv decided to try to run it in three times from inside the five yard line rather than send in Husted for a field goal attempt of 23 yards or less? Remember how relieved we all were when that eventual kick actually made it through the uprights? Contrast that with Coach Joe deciding to kick a 39-yard field goal in overtime on first down with Suisham. That's confidence, that's stability, and that's DCO HOF context.

3+3= 6
So, does this mean 2x as nasty as one of the greatest Redskins, MVP, and last Conventional Kicking Legend Mark Mosley....