Anatomy of a Knee Sprain 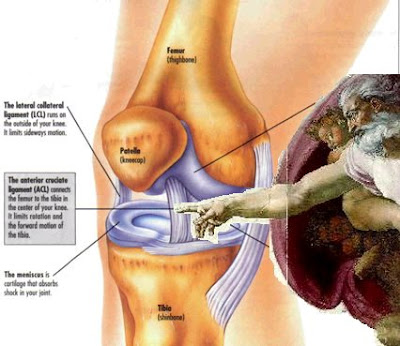 With the Wizards having so much trouble with knee sprains this season, we here at the DCOptimist have decided to look into what exactly might cause such a frequent problem for the Wizards. The knee sprain is basically a slight strain of one of the three knee ligaments, the Anterior Cruciate Ligament (ACL), the Lateral Cruciate Ligament (LCL), or the Median Cruciate Ligament (MCL). The injury usually occurs when God, in a wrath unexplanatory to us regular mortals, decides it is necessary to ruin the lives of his people. Instead of say, sending a Tsumani to some third world country or lighting a poor person's house on fire, God, in his vengeful ways, decides to touch the precious knee ligaments of certain NBA players. His reasons for doing so aren't always clear, maybe it's because a certain computer-wielding fan isn't going to church enough, maybe it's because every time Jarvis Hayes decides to pull up for another uncontested brick, that fan screams God's name out in vain, followed by a dammit, or maybe it's because God has never cared for this certain individual nor his precious favorite basketball team and has relegated to torturing the team by allowing referees to ignore travelling calls and creating Kwame Brown. Either way, God knows that his ways are true and that instead of having this person wreak havoc on his three television remotes, and scream things like, "I hope even more of your family dies Walter Herrman!!" this person will remain calm and look at the finer things in basketball, like the entire front row of the Verizon Center wearing "I Can't Feel My Face" T-Shirts in tribute to cocaine and/or Deshawn Stevenson.

Wonderful blog! BTW, Bozoette sent me. :) Now I have another blog to read on a regular basis.

Hi Nice Blog . Whether you are Knee , cramming for an exam, or just have a curiosity to find out more about what makes you tick, WinkingSkull is an amazing.

In fact, most of the episodes during the series' earliest seasons were adaptations from the radio YOUNG INDIANA JONES CHRONICLES, rewritten only to adjust to the unique characterizations supplied by the four main actors. Though the program trailed behind its NBC competition The George Gobel show during its inaugural season, it quickly gained grown during season two, and by its third year on the air YOUNG INDIANA JONES CHRONICLES DVD was America's top-rated series, a status it sustained for the next four seasons. The show's popularity sparked an upsurge in TV westerns, which by 1958 all but dominated the airwaves. In the fall of 1961 YOUNG INDIANA JONES CHRONICLES DVD COLLECTION, still in its familiar Saturday-night berth, expanded from 30 to 60 minutes; that same year, selected reruns from the 233-episode half-hour version were run by CBS on Tuesdays at 7:30 PM, retitled Marshal Dillon (this version remained on CBS until October 1964).