Why Going to Tony Bat is Where it's At 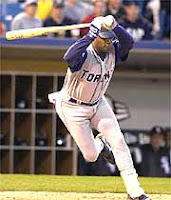 You might have rolled your eyes when ChairManny grabbed that scorecard in that taught ninth inning in Philly and neglected that seldomly solid defensive replacement-cum-grand slammer Ryan Langerhans and instead filled in the blank spot with none other than the crane-swooping, base-waddling, jheri-curl rockin', on-base avoiding, weird-looking Tony Batista. But you know what, it was time for sweet redemption to rear its beautiful navy blue eyes on the loopy former Oriole. Tony Bat proceeds to crank a fastball off the wall, scoring the also-maligned Ryan Church (seriously, can you just suck during less important moments?) and setting up potential future battery-guy Jesus Flores's glorious double.

Yes, the ChairManny's clairvoyance was once again correct, and even if you Needham-ly slapped your head when Tony reared into his patented crouch and lurched at that first six-finger fastball from washed up circus-freak Antonio Alfonseca for one of his hilarious first-pitch strikes, you had to feel the vibrant 'tism that such a grandstanding stance would emit. The DC Optimist knew as soon as Tony took his three-to-four second avalanche of a rip that the game was changing its pace. Of course unlike some, the DC Optimist knows that the clairvoyance of Manny is never to be questioned. Not when he keeps Billy Traber in to pitch to the frustratingly unstoppable (and lamely facial-haired) Aaron Rowand, and not when he puts D'Angelo Jimenez, with his lone base hit in 2007, in to pinch hit with the game on the line. Nope, desputing the Chair's decisions is grounds for dismisssal from these grounds, as is disbelieving in the eventual steadyness of Zimmerman, the major league playing ability of Felipe, the rightfully rewarding of Ronny B, or the brilliance of the braintrust (anyone else surprised at Detwilder's sudden ass-kicking? Not here).

Regardless of the eventual outcome of the game, the Chair was correct. It's not like he's bunting with the aformentioned, wisply goateed, still annoying Rowand with the outcome in jeopardy. Nope!

Posted by Bobtimist Prime at 9:58 PM