Searching for Optimism This Monday?

While we dig up positive nuggets regarding yesterday’s, um, mild disappointment in Landover (and if this summer taught us anything, it’s that there are always such nuggets to be mined), we can find lots to cheer about from the events earlier in the day at RFK (where even Troy Aikman still wishes the Redskins played).

First: a big crowd (biggest of the season)! Second: a fiercely partisan home-team crowd! It seemed evident from the lack of Philadelphia garb in the parking lot at 10:30 am that there might be something resembling a Nats fanbase assembling for this RFK sendoff, as opposed to the jarring “let’s go Phillies”-chanting crowd from the previous night. While there were pockets of Philly philth throughout the stadium that attempted to make their presence known during times such as heart-attack threatening ninth inning rallies, they were for the most part subdued, drowned-out, or drunkenly passed-out. Or maybe they were busy at home re-embracing Donovan McNabb, who they all had but booed out of town the preceding two weeks. There’s that “adopting-for-life”, right Chris Berman? Idiot.
- 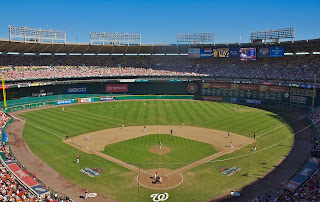 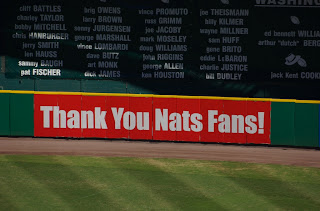 In the end, the 5-3 win was a nice blow to the division title hopes of the Phillies, and it was a satisfying way to close out RFK, even if the players can’t get out of there fast enough (a la the Caps and the Cap Center/US Air Arena/US Airways Arena). As we’ve said before, it’s sad that New York or Philadelphia has to win the NL East, but at least the Nats can play some role in tormenting them each for the last couple weeks of the season. Just as the Nats avoided sweeping the Mets in the last series to dangle the outside prospect of a division win in front of the Phillies, so they took only one out of four from the Phillies to make it that much more stressful for New York going into the final week. Brilliant.

ChairManny addressed the crowd afterwards (via Don Sutton’s wonderfully leading questions), giving us the standard-yet-still-truth-ringing recap of the evil negativity heaped upon the team in the preseason and the handful of loyal-and-‘tism-seeing fans that stuck with them anyway. His key line, of course, was “I am positive and optimistic [about this team]”. But we already knew that.
- 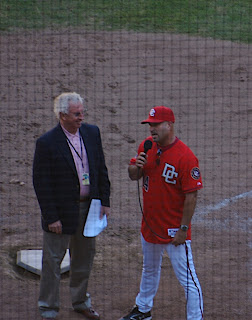 So cram it, Philadelphia. And cram it, ignorant smattering of Phillies fans who attempted to lessen the sting of inevitable defeat with chants of questionable accuracy such as “Last Place Nationals”. Since we all know the Nationals are currently not in last place by the solid margin of three games, we can simply tally this defiance of reality to the frustration of seeing their team possibly choke away a playoff appearance (the Padres did lose, throwing that wild card door wide open) to an alleged doormat. Manny’s prediction of “hurting someone” continues to prove true.

Six games left. Three games needed to exceed last year’s (relatively) expensive, (relatively) squabbling, MLB-(incompetently)-owned team. That would be as tangibly a sign of improvement and progress as we could get, but we know we don’t necessarily have to see 72 wins to know improvement and progress are already here. The Plan lives.
So we can, at least for a moment, step back from the 2-1 ledge the Redskins have put us on and find positives in the 69-87 team now exiting their former home. We can pledge not to panic and bury our team for perhaps a sub-par performance in a home game against a perceived inferior team they could have/should have beaten. We can pledge not to be Philadelphia fans.
Posted by DC Optimist at 12:12 PM

This unique and stylish clothing label is popularly known as Ed Hardy clothing
.The shirts and clothing accessories bearing the ED Hardy Shoes
are manufactured by another giant in the fashion industry. Christian Audigier bought the rights to incorporate the tattoo designs of hardy shirt
to his new line of clothing. The foremost fashion designer is well known for creating world famous and enduring styles of outfitter pants and casual men's wear. So when hardy shirt
and Christian Audigier made a partnership in mid 2000, the result was an excellent fusion of esoteric street art and high fashion.