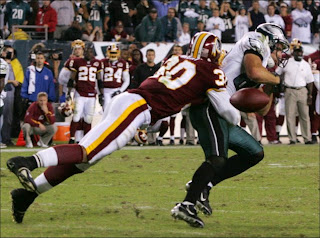 Last night, the revamped, revised, retooled Redskins checked off their second consecutive win of the season knocking off the zero-time super bowl champion Philadelphia Eagles in their decrepit backyard. So many wonderful things occurred during this nationally televised football event, mostly involving blunders both of the pregame prediction variety, and of the coaching variety, but the most wonderful thing, yes, even more wonderful than glorious ESPN.com headlines like this, was the redemption of the front office's decision-making earlier this year. On draft day, many a sports pundit heaped hatred onto the braintrust for their selection of Laron Landry with the sixth overall pick in the NFL draft. They opined, "The moment Washington filled its glaring holes on the defensive line with a safety, the priority became a party 30 miles away." How sweet it was that Landry, that nonfactor wasted draft pick, arrived at the precisely correct moment to dislodge a potential first down catch from Kevin Curtis on fourth down on one of the few Donovan McNabb passes that didn't bounce off the turf.

'Tism-hatred for the Redskins draft was marked with bizarrely incongruent thoughts of Landry clashing with the other superstar safety in the skins' lineup, Sean Taylor, culminating in Taylor missing a few initial pre-training camp workouts. Cut-and-runners decried the two sharing a backfield when their contracts were not of equal standing, assuming with a certain degree of prejudice that Taylor would never warm up to a kid making more money than him. All of these supposed red flags soon fluttered to the ground like an Jon Gruden inconclusive challenge flag thrown during a playoff loss ("I am a fan of instant replay"), and the two safeties started a noticably burgeoning relationship.
Landry broke into the starting lineup, a place never meant for green rookies. He lit up the preseason, hurdling into Kerry Collins' ribs as if he were a Jaeger Bomb in a tilt in Tennessee. He rifled through the Dolphins line to stuff Ronnie Brown to the tune of 33 yards on week one. And in front of a cable TV audience and thousands of whiney, depressed, pathetic, unwashed Philadelphians, Landry forced the knife into the Eagles. And it isn't just the occasional clutch big play from this fantastic Redskins secondary. Everytime a receiver managed to catch one of McNabb's passes before it hit the dirt, they were met by a defender. See Reggie Brown here, being introduced to Sean Taylor's shoulder pad on a potential catch; notice (unless you are Gene Upshaw) how his lifespan has been altered. As a result of plays like this, Iggles' receivers were non-factors. In fact, as the increasingly senile Sam Huff and Sonny Jurgenson continued to point out during their slightly excruciating play-by-play last night, Redskins Defensive Associate CFO Whatever title Gregg Williams was simply dropping his two awesome safeties way way way into the secondary, just daring McNabb to bounce a throw their way. The bend-don't-break D kept the Eagles completely endzone free, leaving the lame spellings of their team name to be chanted obnoxiously only after David Akers field goals.

The Redskins defense has only allowed one touchdown so far this year, and that one was an insult to which newly-minted head-slapper London Fletcher provided pertinent ether for the locker roomers, post hoc. We noted earlier that the 5-11 defense that brought so much pain to us last year was a statistical abberation. We seem to be correct there. Interesting how, unlike the entire ESPN.com sportsnation poll last night, we seem to be correct about something else as well.

Posted by Bobtimist Prime at 10:18 AM