The Detroit Lions continued their proud tradition of football in DC today. They kept it close for a short while, even keeping their deficit to a relatively competetive 14-0 at halftime. Eventually, however, they and their utterly dominant #1 passing offense (over 100 yards on the day!) looked to the past and found inspiration in such notable scores as 31-7, 45-0, 41-10, and 30-7, and realized what they had to do. The result was a second half (a fourth quarter in particular) and a 34-3 result that made the John Kitna Lions worthy to be mentioned in the same breath as its noble big-win-gifting predecessors. It would appear that Kitna was so eager to keep Lion tradition alive that he wore his chinstrap over half of his face to further give the advantage to the Skins: 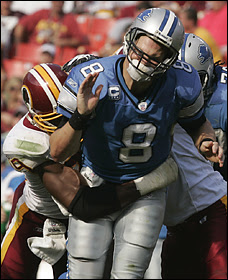 Much more to come later on this optimism-endowed weekend.