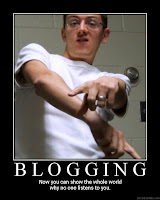 The 'tism levels of this region are off the charts at the moment, despite what many pundits both inside and outside of our 5-lane circular highway region may think you should be thinking. The Caps are undefeated, undaunted, unshakable on the powerplay, and yet are still underranked nationally. The 'skins are dominating defensively and garnering their own variety of "-of the week" awards, inspiring backhanded praise from columnists whose preseason projections were similar to those currently being bestowed onto the Caps. Other strangely contradictory preseason predictions regarding the Wizards will likely see the same fate. (Hollinger says a gimpy Gilbert will lead to 33 wins in one preview, yet says he will bounce back 100% from the injury in another. This is why I steal ESPN insider articles.) But this sort of 'tism inhibition has not deterred the legions from thinking playoffs with each of these respective sport powerhouses. They are LOVING the look of things. And the dudes who share the press box with us and get paid to produce gobs of spectacular copy both of the recyclable variety and of the inter-blogged variety, have been, for the most part, up to the task of whetting the area's 'tism whistles ('tistles?) with their pertinent information gathering.

But with all of these delicious apples in our circumference, there seems to be a few bad ones, namely in the form of the total 'tism-hatred from Redskins reporter Jason La Canfora, who in a strange 'tism-backlash, crafted a long pointed criticism of seldom-utilized wideout and frequent DCO subject, Brandon Lloyd, a post that is rife with backing statistics, personal observations and verbal evidence all stating that our beloved BLloyd sucks. Such a damper was not to be placed on us after we saw BLloyd emerge from the schneid he had been perched on since the beginning of the season, gathering his first catch and positive yardage on the season last week. We want more Brandon Lloyd redemption stories, not stories of his questionable attitude, play, value, contract, commitment, etc. In addition to the strong denouncement of lil' T.O., La Canfora goes ahead and takes a shot at DCO homey Dan Steinberg in the process for simply enjoying BLloyd's presence. WTF with that, Jasno?
But when it comes to blizznoggin', Jasno is out of his league, cuz our man D-Steinzz comes back with the ether the same day on the bog, bitch-slapping Jason's anti-BLloyd rant with a chill-the-eff-out meme that blasts crusty old ombudspeople for dissecting enjoyment from sports news and the like. For this effort, we reward Steinzz with the coveted MAO of the week, not only for sticking up for the freely-expressed, poorly-edited blogform of sports entertainment, but for sticking up for BLloyd as well. Such blind BLloyalty reminds us of DCO cohort, tailgate partner, frequent commenter and message board pwner, da#1skinsfan, who arrives in the FedEx parking lot weekly in his pristine #85 jersey, upseting the child-rearing ticket-holders with frequent foul language, and doing his best to ruin the experience of any fan wearing the opposing team's jersey. da#1skinsfan has been clamoring for the BLloyd breakout performance ever since he suggested his trade to the skins before last season. Why should we have guys like La Canfora looking at game footage and practice notes looking to ruin that sort of 'tism that this area could frankly use more of? We are only four games into the season, there's plenty of time left for BLloyd to emerge (not to mention the imminent playoff and super bowl matchups). Why denounce him now?
It could be a part of the general upsettedness that the entire sports journalism industry is having towards the interblogs. With increased publicity in mind, many NHL teams have been allowing brilliant online analyzers such as ourselves complete press access to their covered teams. We are (duh) super in favor of this experiment that people like our homey Ted Leonsis has duly taken under, and when we conducted ourselves in the press box last week, I feel like we were good peoples. But what do the actual real dudes think of us? To find out, instead of growing some balls and bothering Caps beater Tarik El-Bashir during the game, we hit him up on his washingtonpost.com chat, asking him his thoughts on recent NHL-blogger related beefs.

'tismville, Va.: Totally self-indulgent question here, but what are your
thoughts on having bloggers share the locker room and press box with you? What
did you think of the "blogbox" folk in Uniondale? Were you as salty as some of
the dudes whose reactions I have read about in cyberspace?

Tarik El-Bashir:
I completely undestand why some teams have invited bloggers into the press box.
But I also can understand why some professional media types are upset about it.
In my experience, some bloggers take their responsibilities seriously.
Others don't.
I've got a problems with the ones who don't.
I read a lot
of the Caps bloggers on a regular basis. Many of them are solid writers and
well-informed.
But I also know this: if you want news about your favorite
team, newspapers are still the place to go.

We totally wuv Tarik and his Caps coverage (totally more than former Caps beater Jasno, who BLloyded Jaromir Jagr in what seemed like every game wrap-up) and we want him to be our bff in the box and read our blog (or have Russ Thaler read it to him on the air again), but could he be in the blog-hater camp here? Does he "got a problems" with the DCO? Yeah, we know all of our readers, us included, hit the washpost first for our news, then hit the DCO for their witty interjections and renouncings of negativity, but with the DCO now asking the tough questions (when not cowering), will this spell the end of people stopping for the news before relishing in the 'tism? Other sports journos seem to be quite upset about it, calling us FoxNews and the like, but who watches FoxNews for anything that isn't FoxNews-supported? We don't expect a bevy of Florida Panthers fans to be on the DCO looking for the latest on Olie Jokinen (other than us saying that he sucks and getting mad about it).
All leads back to our MAO D-Steinzz, who sums everything up in this section of the post:

"Now, for a lot of people--most people, even--that means they want to forget
about those troubles and go see their team carry a funny-shaped pile of pigskin
past 11 grown men in strange costumes and then settle comfortably into a grassy
patch behind a white line as their teammates slap their bottoms. For certain
others, that means they want to forget about those troubles and instead listen
to a mohawked rapping athlete with a bad attitude discuss his ridiculous car. If
the mohawked rapping athlete with the bad attitude proves unable to help his
athletic team advance that pigskin past that white line, he will no longer be
paid to put on that strange costume, and we'll all move on with our lives. Until
then, I will keep talking to those athletes."

See, da blogzzz only serve to entertain. If a team wants to amp-up the entertainment whilst amping up our resources whilst amping up their online presence, so be it. It's not like we have washington post blog checks to cash.

Posted by Bobtimist Prime at 1:55 PM

keep up the good work, baby.

There, I said it, thats the source of my rage. How would you feel coming home after the caps game and catching your wife riding this dudes first down marker?