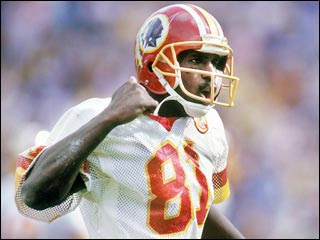 Last weekend was a tough weekend for those of us in the 'tism territory of the Washington Capital Area. While we had the best team in the National League to prop up our spirits with their drubbings of inferiors and their timely camera muggings, we also had to witness the greatest travesty the NFL has ever bestowed upon us. No, not the Carolina Panthers' uniforms, no, not Paul Maguire, nor the NFL network becoming a premium channel. No, the travesty we speak of involves the induction of a certain, non-deserving, scum-of-the-earth individual into the hallowed halls of football's greatest players. During this celebration of football greatness, we had to witness this individual — whom was fired from television for being not only unwatchable, but also a noted regular drug user and racial stereotype purveyor — speak of his accomplishments in front of the camera. We had to witness this person's face encased in bronze in a sculpture likely based on his vast collection of post-arrest mug shots. We had to hear fawning praise from yapping (balding) heads who chuckled heartily on camera at his antics. In short, we witnessed a perversion of sports right-ery.

What made the induction of this degenerate all the more dubious, was the oversight of a much more worthy, much less detrimental, never-before arrested wide receiver who continues to receive a snub-like treatment from the band of ravenous reporters who treat things like "objectivity" like it's a side of honey mustard when their ham-and-cheese opinions are the served lunches of their reportage. There is no need to again prop up the case for Art Monk to be in the Hall of Fame. More glorious, better-researched reports from exquisite individuals have handled this portion of the snubbery with aplomb. What is important is to note how the efforts of these individuals are finally doing their just-cause, and the "reporters" who finally realize the errors in their snubs ought to be credited for finally abandoning their 'tism-hating.
Like Mike Wise before him, Sports Illustrated's Paul Zimmerman (aka Dr. Z) usually justifies his 'tism hating with terrible humor, and a desire to ruffle feathers. He is noted by the unbelievably comprehensive Art Monk Hall of Fame Campaign blog as a "Probably No" vote in Monk's campaign, affixing such low-brow, unresearched opinions as "catching 800 8-yard hooks doesn't do it for me." Yet due to the steady righteousness of Art Monk backers and the everlasting 'tism that this area cannot shake, it seems like Dr. Z has changed face. And for his change of heart, we are rewarding Z with our 8-10 Manny Acta Optimist (MAO) of the Week.
In his latest Dr. Z Mailbag, Zimmerman states that his previously short-sighted opinion was a bit on the under-researched side.

"Maybe it's time to take a closer look at that rather supercilious [800
8-yard hooks] observation. Maybe a player who has drawn such a loyal
following, year in year out, deserves more serious consideration."

Well, yeah Dr. Z, this should actually go without saying when it comes to inducting individuals into the hall of fame. I mean, if we are to select the greatest individuals from certain areas, especially those that possessed world records prior to a change in offensive philosophies throughout the league, we need to delve deeper than their — as you note "boring" — statistics. But I digress.
Maybe we should be a little more upset that it took years of consistent needling from lobbyists in the Monk camp before Zimmerman would do a tiny ounce of extra research, but comments like these leave us elated. As most know, these objectivity-hating reporters have been slamming Canton's door in Monk's face mostly because he never spoke to them after games. Prefering to leave the attention-whoring to the drug-cultured, Monk eschewed interviews, ruffling the feathers of guys who want to berate performances in print. Aparently, a transgression of this magnitude speaks more volumes than, say, holding cocaine parties during the season. And with Chris Carter's eligibility arriving, it will take a strong push to get Monk into Canton, even if Monk still has better numbers than (BOLDED FOR EMPHASIS) EVERY WIDE RECEIVER ALREADY IN THE HALL. First Peter King was swayed through the help of Joe Gibbs amongst the other faithful. Now with Dr. Z in the fold, induction could be imminent.
We thank Dr. Z for realizing the error in his biases and look forward to August of 2008, when side by side, Darrell Green and Art Monk, donning yellow sportcoats, will be showing off their bronzed mugs in Ohio. Even the debacle of Last Saturday can be forgiven when that scene takes place.

Posted by Bobtimist Prime at 11:43 AM

I learned later that most collections of Breitling
were designed over 50 years ago and, despite some changes to the movements and minor aesthetic modifications, they are pretty much the same wristwatch as they were 50 years ago.Like all watches in the Bentley 6.75
collection, the bezel is raised and is unidirectional - it's not a diver's watch where the bezel is one-directional. Incidentally, the stopwatch second hand is nicely counterbalanced with the Bentley Motors
.Finally, this Bentley Motors T
is available in stainless steel, 18k gold or two-tone. Mine is stainless steel (the best finish) and comes with one of the best watch straps you can possibly buy, the Pilot strap; the slightly diagonal, chunky rectangular links really are very attractive.