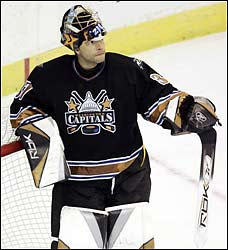 About a month ago we recognized Capitals’ captain Chris Clark for his enthusiastic attitude towards his team, this area, and the general direction of the organization. This week we present a Manny Acta Optimist of the Week award to his teammate and pseudo-captain Olie Kolzig for similar, and in some respects even more far-reaching, comments.

In an interview with Capitals Insider, Kolzig demonstrates his faith in the Capitals’ version of the Nationals’ deservedly heralded Plan. He praises the brilliant summer acquisitions (if not summer hockey) and flat out calls the Caps a playoff team. Not only that, he declares Washington as such a team with “who we have in this room right now,” eschewing the need for flashy, expensive player acquisitions. Such lofty predictions and statements of faith in one’s teammates have, of course, come from other players on other local teams, but it’s nice to hear big expectations coming from the Caps, and Olie in particular, again.

Olie doesn’t stop at noting wonderful offseason free-agent management or his wishes of building on the team’s pre-Christmas success last year. He sheds the light of ‘tism on everything from the impressive development of youngsters Niklas Backstrom and Karl Alzner to his confidence that both his and Alex Ovechkin’s contracts will be extended in due time. He is entirely unconcerned, as we all should be, that these things will be worked out. Even on the off chance things get hairy with Alex, or the least bit distracting, Olie assures us all he and the veterans will step in and restore focus.

Again, it’s great to hear Olie sounding so positive again. While never overtly negative, he has seemed more reserved in the past few years, maybe a little weary from the team’s struggles. But he stuck with the team, stuck with the Rebuild and the Re-Rebuild, did not sulk his way to a trade, and has never wavered in his desire to finish his career in DC.