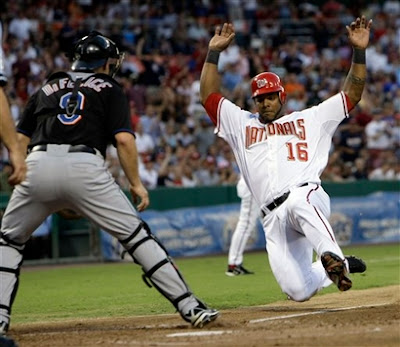 The Redskins lost; it means nothing, given the spectacular performances by key players. The Nationals lost; it means nothing, given the tremendous performance by the newest team member and the blindingly bright overall future of the franchise. Let the Steelers have their hollow 12-10 pre-season victory. Let the Mets have their equally hollow victory en-route to either another post-season absence or early exit. In either case, the Washington franchises turned in worthy home efforts tonight.

We recorded the Redskins' efforts more or less step-by-step in the post below, and we are impressed, most so by the defense. Again, still no touchdowns against. That includes first string, second string, third string, practice squad, and resume-preparers. Basically, it is The System, after all that doubt. The defense looks stellar. The offense looks servicable. Jason Campbell, when not being stopped short by cheap low shots to the knees, would appear to be a quarterback who can manage a championship team in the Brad Johnson mold (or, we hope, much better). In the event of said cheap low shots to the knees, Todd Collns would appear capable of picking up the slack and leading the offense down the field. In the event of Todd Collins faltering, the defense would appear to be able to hold the opposition to field goals or less, giving whatever offense takes the field ample opportunity to win. And Brandon Llloyd finally found the end zone, even if it was a pre-season game. Enough said. Rest the starters, including Jason Campbell (he of the potentially beneficial pre-season-ending bruised knee) for the next few weeks. Bring on the Dolphins and let's get this done.

The Nats. Yes, they lost again tonight. That's what, four losses in five games? Who cares? The verdict on this season is in: Complete Success. While some optimism-haters may wonder how a last-place team can claim success, we nevertheless defiantly state that they can. Sure, they're in last place, but by what margin, one game? Who out there thought it would be less than a 20-game margin? The season is already a blilnding success, with 100 losses being a very, very unlikely result. Any win from here on out is gravy, and a delicious, Thanksgiving-turkey-ish gravy at that.

Tonight they lost to the Mets, those supposed baseball gods who were destined to run away with this division anyway. The fact that the Nats have played them so tough this year is a sidenote that only pure optimists will note. Seldom have there been easy victories by any would-be NL contender against this so-called doormat. Tonight especially our boys put up a valiant fight. Carpenter and Knight documented well the umpiring travesties against the Nats, from multiple blown calls at fist base to non-balk calls that might have changed the complexion of the game.

We will not dwell on such things, however. We will let the Mets have their win on their way to ineveitable postseason heartbreak. We will instead look to bastions of 'Tism such as Wily Mo Pena, the latest potential hero addition to the Nationals's lineup. His debut box score may read 1-4, but these cold numbers will not reveal the blistering shots he hit to the outfield (one of which would have registered as a sacrifice fly, had the afforementioned balk beeen called) or his two important runs scored. More so, his line would not reveal the faith the braintrust has in his potential, in his ability to fill the left field position in a way that Ryan Church perhaps has not.

Two teams, two losses. In the end, they both won.