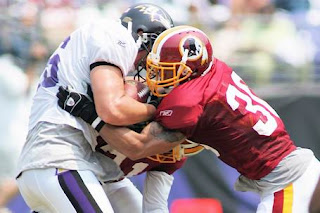 The DC Optimist was lucky enough (if you count being in Bawlmer in torrid heat temperatures as "lucky") to witness first-hand the fast-developing relationship between the future greatest-safety-tandem-in-the-history-of-the-NFL at the Redskins' generally successful scrimmage against inferiors up north. Sitting near the Redskins sideline, we witnessed the young Laron Landry, fresh off of rushing his agent into finishing a deal so that he could attend this glorious camp (very team-first, no?), tailing the physically marvelous yet intimidatingly stoic Sean Taylor throughout the practice sessions, picking the pro-bowler's blow-out-fro encased brain for tips on playing the as bone-crushingly as physically possible. Taylor, in contrast to the manner in which he deals with ravenous reporters, took the young Landry in, often showing him the ins and outs of their respective positions. The DC Optimist witnessed numerous fist-bumps, in fact, the two were pretty much inseperable on the sidelines, looking like a more athletic, less drug-addled Raoul Duke and Dr. Gonzo, although I think the major hallucinations that this duo will look to accrue will be for their opposing wide receivers, dealt via earth-shattering, Brian Moorman-nightmare subjecting, legal hits. Just witness the two collaborating on Todd Heap in the photo above, no doubt causing a loss of bowel retention. I look forward to Terry Glenn again sensing the potential impact of either 21 or 30 (an area superfans at extremeskins have dubbed, "Area 51") and flinching no matter what side of the field he attempts to circumvent.

Speaking of Taylor, of whom he rarely does himself, many have pieced together profiles via other people's quotes in light of Taylor's refusal to deal with the Steve Czabens of the world. A favorite from this piece was this one by perennial quote-machine Clinton Portis:

With T.O. nursing more phantom, press-whoring injuries, will it be Taylor finally escorting him into the broadcast booth were he ought to be permanently ensconced? Portis has already emitted a great amount of 'tism earlier in this offseason, and it's great to hear him continue brimming, especially when it involves his former classmate at the U. It sure seems like a long time since 'tism-haters were clamoring for reasons why this safety duo wasn't going to work, mostly involving baseless accusations regarding Taylor's committment to the team. Gee, his missing from mythic OTAs a couple of months back seems like even more of a pointless waste of ink, doesn't it Sally?

And with the continued development of Taylor, it's ever the more special to pair him with such a sponge-riffic Landry. Now, if the two tandem up and change the Redskins defense to a respectible one instead of a laughable one, wouldn't that mean that draft pick prognostigators would again be wrong in their assessments? This one wouldn't be.

Posted by Bobtimist Prime at 9:30 AM

You heard it here first. Kevin Curtis. Broken ribs. Week 2. MAKE IT SO!