New Members of the DCO HOF, and Dealing With Phonies 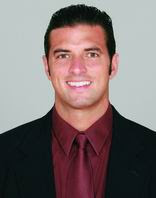 Even though we fully believe the Redskins would not have blown another second-half lead on Sunday had that famous 12-men-on-the-field challenge not been made, we at DCO nevertheless honor those credited with bringing it about. Defensive coach Bill Khayat (pictured) and assistant video director Todd Davis have been identified as the two coaches “upstairs” who tipped off Coach Gibbs to the Vikings’ illicit player population. For the brilliant move in the face of desperation and slightly waning momentum, for giving the Redskins the ball back on a crucial drive, and for squashing the burgeoning optimism of the Minnesota crowd, we proudly induct Khayat and Davis into the DCO Hall of Fame. The inductions double the population of this exclusive club, which until now consisted only of John Lannan and Shaun Suisham.

Now it’s several days of hearing all that “control their own destiny” stuff. The situation is even better than that of course, as even a loss to Dallas doesn’t mean playoff extinction. There is, of course, great optimism amongst the populace, and lots of “it’s good Green Bay lost” sentiment, because the Cowboys will be playing a game meaningless to them, and possibly resting starters. It’s unfortunate in a way that we may not see Romo’s doofy smiling mug the entire game, or any of the game, as we absolutely feel the Redskins would be up to defeating the full Dallas contingent. It’s definitely unfortunate that we have to hear Cowboys fans already qualifying what they seem to think will be a sure Redskins’ victory. It’s only Tuesday (and Christmas, at that) and I’m already sick of hearing “oh, we (the Cowboys) are going to lose, but it doesn’t matter.”

Of course, living in the DC area, I’m mostly hearing this from people who do not live in Dallas. This brings up the eternal question: why is it that Cowboys fans born thousands of miles from Texas (such as, um, certain relatives and friends of certain bloggers) are more vociferous and obnoxious in support of their “hometown” team? Why is it that Cowboys fans actually from Texas generally seem to be more decent and almost polite despite their support of the most evil sports team on the planet? My theory: the former know that they are nothing but bandwagoning frauds (the king of this group is of course LeBron James, he of the Cowboys, Bulls, and Yankees fandom, despite his Ohio roots), thus need to overcompensate for their deep personal failings (and lies) in their completely irritating and baffling enthusiastic support (perhaps also playing a role: some latent-and-unfulfilled childhood wishes of actually being a cowboy). In this way, they almost convince delude themselves that they are from Texas, and that the Cowboys could be legitimately claimed as their own. So the next time you run into a Dallas fan from Trenton, New Jersey, or Annandale, Virginia, ask them the source of their rooting interest. The more convoluted or ridiculous the explanation, the more they truly know they are frontrunning phonies.

Ok, a bit of a tangent there. The point is: here’s hoping Romo, et al accumulate plenty of rust and go completely into the tank three weeks from now in round two of the playoffs (against the Redskins, perhaps?). Maybe that will shift some DC-area traitorous Dallas fans back to their real home team.

On the other hand, maybe this starter-resting isn’t such a bad idea after all. The Redskins have numerous nagging injuries. Perhaps there should be a full-scale resting of key personnel on the Washington side as well. It would even the odds, taking the “you only won and made the playoffs because we let you” arrow out of the vile collective quiver of Dallas fans. It would also be a true testament to ‘tism, a belief that this team that has endured so much is absolutely destined to make the playoffs, no matter what happens. So, problem solved: rest the damn starters.