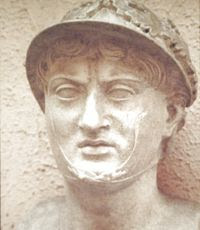 It's clear that history (and we mean all of history, not just sports history) is against the Cavaliers. Don't believe this nonsense that LeBron James is ok. A grade II ankle sprain is nothing to simply shake off. Yes, it would appear that Cleveland handily won Game 1, but as we know already, it only appeared that way.

The Cavs may well have won the game, but lost their best player (or at least had him reduced). If this sounds historically familiar, that would be because it is. To paraphrase King Pyrrhus (pictured), one more victory such as this will surely undo Cleveland, opening the door for multiple Wizards' victories, a trip to the second round where they will pick up badly needed help in the form of healed superstars, and ultimately a run to glory. Then, many will be called to answer for their reactionary pessimism.

Wow, an optimistic view of Washington sports AND a freakish knowledge of ancient Greek history? What CAN'T you guys do???