Gilbert to Return in Time for Championship Parade 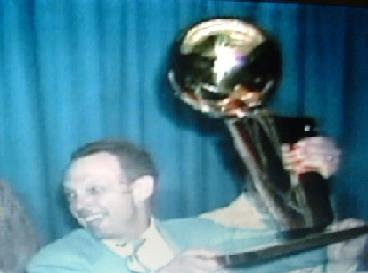 The Magnetic Resonance Imaging results on Wizards' guard Gilbert Arenas revealed what looked to be a rift in the meniscus-time continuum, likely leaving him out of action until the Wizards celebrate their inevitable championship on the streets of DC, where he will be 100%.
With 66.6 (coincidence?)% of the Wizards' big three out for the remainder of the regular season and the beginning of the playoffs, many fans are less than optimistic. However, with solid contributions from guys who have not been contributing during the more competitive stages of the Wizards season, the loss shouldn't amount to much. For example, Antonio Daniels, given starter duties last night by eerily prophetic coach Eddie Jordan, had a career high in assists. Etan Thomas has returned to first-two-games-of-the-season form with double digit points and rebounds in consecutive games. Antawn Jamison remains upright as well, averaging 19+ points and almost 10 rebounds, and Darius Songaila, although Jarvis-esque last night, is rearing into some sort of eggshell-colored form. Brendan Haywood, with the pressure of legitimate competition likely behind him, ought to return to pre-sulk levels of loopy post moves and fumbled put-backs. Lets not forget midseason call-up Mike Hall, who has been a small, acne-like blip (thank you High-Definition) on the Wizards lineup radar. Everyone loves this kid, a few even for his basketball talents.
See, they are almost there! And to help the Wizards retain their focus for the playoffs, the DCO has put together a list of to-dos for the Wiz to finish up their 9-game win streak, motor into the playoffs and crush any team they face, whether the other team wants to face them or really wants to face them.
1. Have Daniels average more than 17 assists per game. Shouldn't be a problem now that he has the offense at his command, even while Eddie Jordan makes the decision to keep him on the bench in order to watch the lead evaporate. Daniels ought to continue barrelling through the lane hitting cutters (no, not the Wizards fanbase), and pulling up for his occasionally reliable jumpshot.
2. Have Etan average more than 17 points and 10 boards. He's motivated, he is smallish for his position, he tends to scream a lot and he has dreds. No one predicted Lil Jon's rise to popularity either. (WHAT!?)
3. Have Jamison average more than 19 points and 10 boards and remain upright. Alright, this is looking like the same team that lost back to backs to the Charlotte-freakin'-Bobcats, but if Jamison can be the third (non-sprained) leg of this new big three, the Wiz ought to at least beat the Hawks (MAGIC NUMBER STILL = 1)
4. Have Mike Hall breakout (sorry).
5. Have Andray Blatche get healthy, fullfill his potential, and transform into Kevin Garnett like the internet says he will.
There are still tickets remaining for the Cleveland game too!

Labels: Gilbert, God hates us all

more, more, more! so happy i found my way here. if i were funny, this is what i would write about our teams. very well done.

There certainly is no end to the number of people promising such greatness. The ranks of executive Coach Purses
have swelled from 2,000 in 1996 to some 10,000 today, and sorting through them is not easy. Different Coach Bonnie
work in different ways. Some work only over the phone; others come to your office; and a growing number work in group settings, Coach Wristlet
dozens of business owners simultaneously. Some provide tough love; others coddle and cosset. There's no standard fee structure, either: Rates can range from several hundred to several thousand dollars an hour, and a few Coach Ergo
will even ask for a piece of your business. Some demand a commitment of a certain length of time, others are pay as you go.