Anatomy of a Knee Bruise 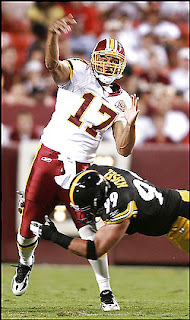 Shock. Horror. Suicidal Tendencies. Intoxication. Blood-curdling violent revenge thoughts. Relief. Belief. The emotional roller coaster of Saturday night's meaningless FedEx field warm up was enough to make someone who downed three Heinekens and two or three shots of Jaegermeister in F40 in a short period of time due to conscious-crushing game time parking lot traffic ruining whatever tailgate was planned, hurl. But thankfully, even though it was one of the first plays your trusted narrator witnessed live at FedEx in seats pilfered from elitist lower level season ticket holders, another, more glorious thing was witnessed. Upon the unforgivable actions of Brett Keisell and the subsequent silence that befell the crowd (save the 10,000+ unwashed West Virginians in attendance, who hooted and hollered at the sight of fireworks and running water), a noticeable aura was emitting from the seats. That aura, in a secret-like manner: 'tism. Sure dirty hits from Steelers in that likelihood usually mean certain doom for quarterbacks, and since they are usually delivered in the midst of a breakout game and perfectly delivered pass, the time seemed perfectly right/wrong for the worst to happen. But due to the united thoughts of the remainder of FedEx field's innumerable filled seats, Campbell's knee ligaments were left unharmed. Instead of a this dirty, unnecessary play in a meaningless game from a guy who likely runs over baby meerkats with a gas guzzling SUV that blasts Toby Keith from the CD player, the play lead to nothing but a bruise. We could reason this happened due to Campbell's savior-like qualities and intangible knee strength. But I think we, the crowd should be taking credit here. Instead of panicking and unleashing a murderous rampage upon every West Virginian in attendance, the crowd chanted deep inner thoughts to the silent forces that control the universe, ultimately convincing them to hold Jason's knee ligaments intact for their due trot through the gates in Phoenix for Super Bowl XLII. After those thoughts were read and the forces held their own, Jason trotted off the field unharmed, and the home team crowd was left to make jokes about Ben Roethlisberger's motorcycle riding (example: Big Ben attempts to roll out and slide for a few extra yards, yet is hit, "He just flipped over a Buick!"). Yes, it was 'tism that kept this season from becoming Joe Gibbs crying over the promotion of Todd Collins from third string noodle-baller to head thrower in charge, or, worse yet, the return of three yard dumper-offer Mark Brunell, whose fourth quarter comeback on Saturday ended like many of his fourth quarter comebacks during 5-11.


But this meaningless game had no meaningful implications on the season, unless you count the return of Brandon Lloyd, the DCO's preseason comeback player of the year, who finished his seven yard ball-keeper with an emphatic goal post slam. Or you could draw meaning from the already-having-returned-to-form Redskins defense that has yet to allow an endzone dance from would-be first, second or third team offenses. Game one was about brilliant free agent acquisition London Fletcher, who speared into running backs in a manner that would leave Warrick Holdman grasping for a loose jersey on the turf. Game two was about brilliant Redskins draft pick Rocky McIntosh and his ascent to preeminence, as he layed into Stillers all night, even dropping a potential interception, very Redskins-esque.

Intelligent fans understand that while three fourth quarter field goals may have swung the final score in favor of Morgantown's favorite team, more excitement was to be felt on the skins side. And even as some lout tried to take pride in his team knocking Campbell out of the game, as this one gentleman did on the way out of the stadium, he ultimately had no effect on us, for the strong forces of 'tism understand that his feelings come from years of neglecting proper hygene in lieu of illicit actions with local wildlife.

The DCO harkens back to late last October, where during an innocuous trip to the Verizon Center for a glorious Wizards win, a luxury box (BALLIN'!) was shared with Jason Campbell. During this brief, photographed, akward exchange, could the strong forces of 'tism have transferred from its proper conduit to its most worthy benefactor? Check the evidence for yourselves: 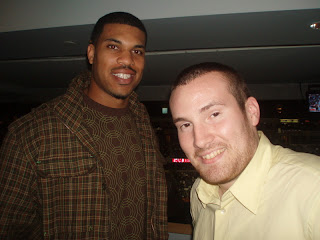 Posted by Bobtimist Prime at 8:52 AM

Why I may not agree with all of the comments about the team of my youth...Da Stillers. I give you props for a very well written article.

And it sure as hell was silent when JC went down. Thank goodness he walked off!

These top sports stars are smart. They're good already. Even great. Some are all-stars and superstars. Why do "they" have a mind Coach handbags
? They want to maintain their excellence. And, they want to get better. They want every edge they can get, because they know their opponents have this mental advantage. I have Coach Bonnie
top corporate America executives, and you can turn on the TV and see the top college sports stars and major-league pro sports stars I’m Coach Ergo
. This article will help you learn what a Mental Game Coach Gallery
does for these peak performers, and about how you can choose the right mind game coach.