And the Future Contributor to Winning the Cup is... 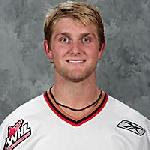 Karl Alzner. He's big (6'2", 206 lbs.), he stays at home defensively (as the blogger does), and he looks like a thoroughbred. "Al," (as in "Iafrate") models his game after Chris Pronger and Niklas Lidstrom as opposed to Sergei Gonchar, who no one should model their game after. He even wears number 27 in honor of recent Conn Smythe trophy winner Scott Niedermeyer. As the Caps' time on the clock wore down, the DCO braintrust discussed the possibility of a Niedermeyer-Pronger package in exchange for the #5 pick, but the deal was likely rejected due to Alzner's embodiment of both players simultaneously.

A word on the uniform: It's no coincidence that the letter "T" is most prominent. The DCO has no doubt that this "T" represents the mantra that is sweeping the area: 'TISM (the dot on the "i" represents the apostrophe).