Draft Day Brilliance by the Grun-trust 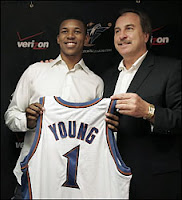 With the sixteenth overall pick, the Washington Wizards just cemented their perrenial playoff boundedness with the spectacular selection of NBA-sized (6'7") shooting guard Nick Young out of USC. Undoubtedly the Secret-tinged 'Tism wafting through Madison Square Garden, provided by all of our 47-per day readers, allowed the sweet-shooting, adversity-surviving, documentary-inspiring, hyphen-utilizing shooting guard to slip from New Orleans and Detroit into the gratified hands of newly-annointed head baller in charge Ernie Grunfeld. The stepping down of Sue O'Malley, the first-ever female president of a NBA franchise, left room for Abe Pollin to give ultimate decision making duties to Mr. Grunfeld and he responded by plucking another brilliant selection from this ballyhooed pool of college talent. Besides those luscious measurables, Young has shown the ability to take over games, hit major jump shots, have great offensive talent and dunk on people, things that Deshawn Stevenson posesses only occasionally (hence the "Mr. 50-50" nomenclature) when he isn't feeling his face.

Could Young be the replacement for Stevenson, who is looking for a new contract that fits his mediocre, yet solid value? We here at the DC Optimist hope the answer is "no." Deshawn, while having Extreme Accuracy issues at the end of the season, -- a season we have all wiped from our memories like a prominently-chinned Ben Affleck in the gawd-awful Phillip K. Dick abortion "Paycheck" -- was the best free agent acquisition of 06-07, better than Larry Hughes was when his bones managed to hold themselves together for two to three game stretches in Cleveland. He fit snugly into that forth scoring option role like so many Keith David movie appearances. His burgeoning relationship with the now-needing-to-be-pampered Gilbert was also a nice aspect of that forgotten, forever asterisked '06-'07.
Screaming ESPN analysts may again curse the Grun-trust for not finding a big man that doesn't exist outside of Minnesota, but we are in awe of the manner in which Ernie grabbed Young, for now the bench, ever the land of despair, has been boosted further. I am not in favor of sticking the kid into the starting lineup right now, with the newly-reasonably-contracted (hopefully) Stevenson already having earned that position; I want him coming off the vastly improved bench. Before the debacles of last season, the Wiz managed to draft a massive Ukranian kid name Oleksiy Pecherov who marinated in Europe this season, expanding his musculature and improving his basketballing, to be their big man of the future. While Pecherov was gathering his NBA-readiness, Andray Blatche was displaying his, with the occasional brilliant contribution in between earning Eddie Jordan's scorn. Both of these kids should be early bench options, and Young can serve as the first scoring option off the bench, replacing the often sucky Jarvis Hayes.
We have loved Jarvis's tenure in Washington, with his occasional bouts with health that kept him out of his home on the DL, occasional bouts with effective basketball play, and his gleaming dome. But it is time for him to move on and allow for this Young to work his magic.

Lest us not forget the selection of defensive guru Dominic McGuire with the 47th overall pick, who is bound to be an Eddie Jordan favorite with his penchant for defensiveness. According to our scouting department, McGuire (strangley not an Irishman) snatches rebounds out of people's hands, slashes to the hoop and "has all of the tools in place to be a lock-down defensive forward in this league." As if he were Dmitri Young displaying his recent plate (both dinner and home) output, the Grun-trust again strokes another much needed hit. Imagine McGuire being sent into the game in the waning minutes of the forth, causing an ignored travel on Lebron, and being extremely pesky otherwise. DCO Final Draft Grade: A+

Posted by Bobtimist Prime at 9:18 PM

i had no idea you blogged, good stuff