Speculation Not Pointless After All 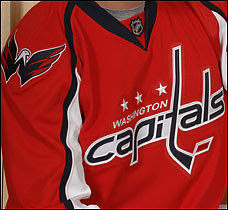 Well, I guess we should have waited an hour or so before calling speculation over the new Capitals' uniform "pointless" in our last post. It turns out those Internet rumors were presenting the real deal after all. So much for the Big Surprise tomorrow at the Kettler Capitals Ice Complex.

Our opinion of the new look can perhaps be best summed up in the initial reaction of a DCO member a couple of days ago, when first viewing the "leaked" jersey: we don't hate it. Despite the views of numerous negative commentators on Capitals Insider, we actually think it's a pretty good look. Yes, it goes back to the old days, but is that necessarily so bad, so bad that so many people have to write something as clever as "excuse me while I vomit" when writing about the uniform? While it may be natural to initially have a negative reaction to such a drastic change, to not even give the new look a chance to, as cliched as it sounds, grow on you, is a bit much. It's grown on us the past few days and, judging by comments on sites where less-self-flagellating fans hang out, it's growing on others (sure, plenty of others dislike it, too, but what do you expect?).

Another take on this situation might be to ask the question: why must somebody always seek out to ruin a little surprise such as this one? While part of us may applaud or admire the enterprising "fan" who cracked in to the Caps web site to find this little unrevealed gem (or hunk of crap, whatever your preference may be), we must ask: why? Is it too much to wait a couple of extra days to end the suspense in proper press-conference-revealed fashion? Part of the blame is of course with whoever made the design so hacker-vulnerable in the first place, but it would be nice to not have to worry about such things.

Regardless, the new look is out now, so all us Caps fans have to ask: is it so terrible that we must change our loyalties? Should we just be thankful that our team is not the mustard-garbed Nashville Predators or the truly horrendously dressed Florida Panthers? Or should we withhold vitriol (and perhaps even gushing praise) until this one settles in, and maybe until we see it in action? Whatever the case is, don't jump on the team just because your initial reaction to the new logo isn't positive, and at the very least hope for big things on draft day tomorrow, and in the all-important free agency period to come.

very funny even for Cap fan...