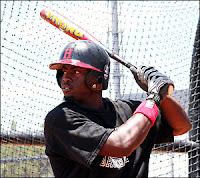 Yesterday the Nationals had their third-ever MLB draft, selecting sixth overall, and several other times in the early rounds, boosting their burgeoning farmlands in Potomac with high-grade live armstock, maintaining the youth-based focus of The Plan™ and promoting grassroots success that was slashed and burned to the core by neglectful hive ownership. Attempting to yield crops from what was a cut, burned and salted landscape is something that takes strongminded, level-headed and strategic decision making. And based on the superbly bright prognosticating regarding the eight nicely bred young men chosen by all of the deciding parties, we have named the Nationals' brain trust as this week's MAO of the Week.
DCO's favorite writer and constant purveyor of 'tism, Tom Boswell was on hand to pick the brains of the trust, noting that their mutual excitement over each of the picks was contagious, and despite the lack of Red Bulls for the fantastically excitable General Manager Jim Bowden, this swarm of 'tism was exquisite and should never go unchecked. We would first of all like to commend the Boz for attempting to throw our requested four letters into his column, for we noticed that they were obviously clipped from the final print of the Post by overzealous, under-rested copy editors whom recognize no word unless it has been listed in Merriam-Webster's 11th. We would like to extend a thank-you for the (sorta) shout out to the Boz, whose report of the Nats's head-people-in-charge and their assurrance that all picks were top-of-their-list good, delivered this nugget of 'tism that was especially exciting.

Every team falls in love with its own picks and thinks its rankings are smarter
than anybody else's. But by nightfall, the Nats' front office practically needed
sedation. According to President Stan Kasten, the team's top three picks,
including Burgess, the 49th pick, were in the Nats' top 20. "There was a big
cheer when we knew we'd get Burgess," Kasten said. Even pick Nos. 67 and 70 were
graded in Washington's top 30. "You have to discount any team's enthusiasm,"
Kasten said. "But we're really happy."

No enthusiasm is discounted in these parts, Mr. Kasten. And the aforementioned Michael Burgess, whose bat power is already approaching legendary status (473-foot home run over the 60-foot-high center field wall in Sarasota's Smith Stadium), shall now be known as the Meaty Legend, for his hearty, five different types of swine approach to the plate. Looks like The Plan™ will be working out just fine for the Nationals, whom with the sixth overall pick took Missouri State lefty Ross Detwiler, a brilliant pick, whose franchise-uplifting potential mirrors another impressive sixth overall pick by a neighboring franchise. With number 31, the Nats grabbed Georgia High School lefty Josh Smoker, who has hack sportscenter announcers salivating at the possible highlight package calls. Headline writers too are eagerly anticipating their first "Smoker Lit Up" or "Smoker Chokes" upon the emergence of this fire-metaphor attached baseball player.
What is equally great about getting such spectacular raw talent in the draft this year is pairing them with an equally spectacular manager. Again taking the time to punish laziness as if it were candy-reaching four-year olds, Acta's benching of his near-progeny in Felipe Lopez is again proof that he's the best. And never would we neglect to mention this legendary clash with the Times' beat(down) writer Mark Zuckerman, where the ChairManny not so much as preaches the 'tism gospel as he enforces it. Kudos to you Manny. For even with a slightly less successful homestand, running out grounders is uber-important. Manager Acta knows that if we are going to fall, we are going to fall the right way, "like an American."

Posted by Bobtimist Prime at 10:58 AM

Everything we do in our football strength program is colored by that approach. Because the players see me as a leader and not just a lifting Coach Outlet
, they buy into every activity I put them through and understand that my primary goal is the same as theirs: to win football games. Coach Wristlet
third coordinator model gives me the credibility I need, and our success on the field speaks for itself. There are many ways to build strength in football players, and every strength coach has his preferences. Some like a high-intensity machine-based program. Some focus on the big squats and big benches. Neither will books, internet sites, or audio recordings. Learning to Coach Ergo
requires getting with an experienced Coach Gallery
to learn and practice the art and skills of coaching.