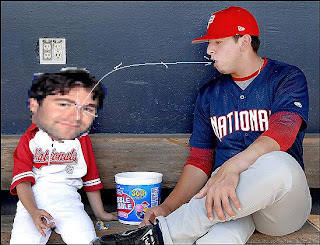 It's time to look ahead. A forgettable stretch against a team from a different league (a team that, according to the ChairManny, is World Series-bound) has finally subsided, and we can again look forward to the Nats crawling back towards competitive play (still only 9 games back!). The Nats can take solace in not having to face double-digit run deficits, no matter how furious their attempts to thwart them are. They can see their rehabbing starting contingent tightening their tender tendons in Potomac, soon to return with their unexpectedly solid productive means in tact. This immediate future is brighter, folks, and it's even more illuminous when you consider the future of the future.
Yes, this Future-gazing continues to delight us here at the DC Optimist in the same manner that slipping on a newly designed, and deliciously retro-styled jersey provokes great visions of possibility. A new set of clothes, a new attitude (cue the Patti Labelle). Thankfully for us, the Nationals future involves The Plan™, a strategic foundation-building effort that has been effortlessly followed by the brilliantly patient ownership braintrust. We may have detailed the gems cultivated in last month's MLB draft, and how they are essential to the fruition of said Plan™, but we had yet to mention the seeds that had already been sowed last year, when the Kasten, Bowden and Lerner begain this fastidious reclaimation project. That is why we have awarded our 6-22 MAO of the Week to Washington Post staff writer Dave Sheinin, for in his 'Tism-frothed piece on Nats' wunderkind hitter Chris Marrero, he reminds us that we have greatness already in the wings, signed up and at 18, bursting through the minors like the "Ska-POW"-echoing baseballs flying from his parents' casa.
Sheinin tries in vain to curtail the blatant 'Tism rising out of his laptop, lacing the piece with Marrero praise that compares the kid to Albert Pujols, Barry Bonds, God and Satan (well at least Pujols). What's that? A genuine, top of the line prospect waiting in the wings to join thoroughbred third baseman Ryan Zimmerman somewhere (first, outfield, who cares) on the diamond? If that doesn't get those 'Tism receptors firing in your body, I don't know what else will. But maybe I do...
Some snarky "blogger" or "CBS Sportsline" columnist name Eric Kay attempts to inhibit 'Tism with this gawd-awful list of terrible jokes and poor analysis regarding the DC pro sports teams. We aren't the first to point out the fraudulence that exists within Mr. Kay's prose. But we feel the need to tack on a bit more ad-hominem firepower. This Kay claims to pledge allegiance to the Washington Sports franchises, being a native of the latte-slurping, sweater-tying, SUV-driving, urban redevelopment-loving, minority-avoiding Bethesda. But we can't get with someone who gives such dire outlooks to all of our loving braintrusts in multiple sporting areas, especially when, even if he thinks his jokes are so "lol" and he links to the wizznutzz, he is completely off base and traitor-like in his ways. Could this abomination of a sports columnist actually be the offspring of 'Tism Hater Hall of Famers Sally Jenkins and Mike Wise? (it was a wild Christmas party at the Post that night, Sally must have been turned on by Wise's fruit-flavorful shirt collar, even laughing at his references to rap music. Never would they know the final product of their insipid union).
Hilarious stuff about the Redskins along with that fresh material about Dan Snyder and his purchasing decisions. Hmm, I see no mention of the fiscal restraint, brilliant drafting strategies and mindful patience exuded this offseason, do I? Maybe you should instead compare the recent output of Hall of Fame Coach Joe Gibbs to that of the "non-existent" rival in Dallas? Right, not much different. In fact, there was no mention of how the skins have won three of the past four against their inferiors. Jason Cambell, the "newby" quarterback dooming the skins? Seems like he has played a total of three games less than Pro Bowl (lol) QB Tony Romo. Shouldn't the 'boys be more concerned about him? Maybe while googling lame 80's movie quotes and imitating Bill Simmons you could come across some of the fawning praise being bestowed on the "newby" Cambell from everyone in the organization. Maybe you could cue up some game footage where he was shredding the Philadelphia and New York defense, only to have the skins sieve of a defense let him down again.
And we all know Gilbert is going nowhere, so your little comments regarding his desires to leave are completely off-base, not to mention un-funny. Last season's "epic meltdown" was a freak occurrence, not some product of terrible play. What team was in first place in the Eastern Conference before their players started getting swarmed by the injury bug? riiiight.
Don't speak of the Nats without mentioning The Plan™ or the exploits of their diamond-in-the-rough pitching staff. Are they the worst team in the league? Ever? Don't think so.
And with the Caps gaining new sweaters, new attitudes, new brilliant rookies, and a new, modestly priced, yet astoundingly productive blue-liner this offseason, you can hold off on the lame references to Whoopi. Jeff Halpern was a novelty, Dallas can have him and his peanuts. Because the Caps were sooooo worse off without him (record looked the same to me).
Eric Kay, you are dead to us.

Posted by Bobtimist Prime at 11:40 AM