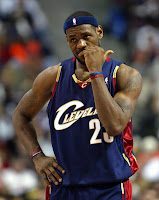 Many a sports columnist has been singing the praises of Lebron James recently, now that he has scowled and whimpered his way through the relatively competitive (but not really), Eastern Conference and reached the first NBA Finals in both his and his decrepit franchise's existence. However, unlike those finger-waggers who see this corporate-addled, personality-free, anointed-by-way-of-Nike ballhog as such a wonderful thing for their pre-teens to emulate when compared to the petulence, single-mindedness and indecisiveness of Kobe Bryant, the DC Optimist feels differently. We see Lebron's faceless coroporate branding as just as detrimental to this league as Kobe's transgressions. And despite being able to weed through the talentless (or superstar player-less) Eastern half of the NBA without Shaq, we still see him as no better than the much-maligned Bryant. In fact, it appears that Lebron has taken his constant comparison to Kobe a bit too far, and as a result, "Main Attraction," Lebron's first professional forray into rap music has occurred. Why aren't the finger-waggers getting mad about this record the way they just about lost their minds when Allen Iverson, an MVP-holder who took his team to the finals in the East did the same thing some six years ago? Well that is where we come in. This record is terrible. And here is a list of reasons why it has made Lebron a terrible "face" of the NBA. Shame on you, Mr. James.
1. Why include Paul Wall, the highly-entertaining car-rapper from Houston, Lebron? What, no Ray Cash? Why's that Bron? A Desire to play for Rick Adelman and Yao in H-Town maybe? Also, Mr. Unselfish does little to assist Paul Wall's ragged verse where he's "commentating like Stuart Scott." I don't want to hear the real Stuart commentate, Paul, please reference Steve Buckhantz instead. Also, with Paul Wall being melanin-deficient, why include him over a promintent black rapper?
2. Unlike Kobe's masterpiece K.O.B.E., this track neglects the usage of a finely-voiced R&B superstar like Tyra Banks, instead leaving the hook-singing to 'Bron (in a ballhog sort of manner). The results? Ragged screaming-esque chants meant to mimic rappers from New Orleans (hmm, playing alongside good buddy Chris Paul in that party city down south sound more enticing that being in Cleveland, which could use a hurricaine, frankly). "Got a lotlotlotlota dough?" Sounds like a me-first, contract-year type player to me.
3. I have a problem with the whole "Viscious with the Pivot, See me handlin' the wheel/Many critics predicted, I can handle the pill." Really? Because I think that pivot, three step, pump move, which is illegal, yet uncalled, is not viscious. It is fundementally incorrect and wrong for children to mime themselves after this, depending on wayward-looking officials. Do we want our children to mimic criminals because they get away with it?
4. Another intimation that Lebron hates his supposed residence in Cleveland: "Can't Help that I shine/Attracted to the sun rays." Hmmm, then why would he want to reside in a city known for having no sunlight? Wouldn't he rather be chilling in Miami with Shaq and them, like Mike Wise says everyone does?
5. "I mean I got dimes/like Sprite got lemon-limes." I guess all kids should be sexually promiscuous when they become NBA superstars. Pretty terrible things for children to hear. Cute inclusion of your corporate sponsors by the way, you lackey. Maybe all children should consume this highly-sugared poison when obesity has turned into a global epidemic.
6. And the biggest transgression: "A businessman, nah, My name is a name brand/perfecting my game plan/my name is a name brand." The whole repeating-the-last-line twice schtick went out when Mike Jones's phone line went dead, but the reason this line is terrible is that Lebron, is still completely focused on maintaining this sort of coporate presence before all else. We pointed this out before. Why should we cheer for a corporation?
The DC Optimist hopes Lebron drops the mic as soon as possible, for children, basketball, maybe even the city of Cleveland are all in trouble if it continues. And the sad fact remains that this corporate tycoon, hell-bent on ruining the good values that basketball promotes, continues to be worshipped by terrible mainstream media columnists.
(big ups to blastmaster on the hook up)

Posted by Bobtimist Prime at 12:09 PM

pure gold. I got a rhyme fo dat azz.

"baby bron bron, your raps is kinda dumb,
when the critics hear them you'll start chewin on your thumb.
there's not a ref in the rap game to force a foul call,
baby bron bron needs protection, god forbid he takes a fall.
we're tired of your tears, tired of your crying,
theres no reason to defend you, its not even worth trying.
god forbid youre breathed on, the whistle will be blown,
its time to face the real world, your just a kid thats overgrown.
so have fun in the finals, its the closest you'll ever get,
the wiz will be healthy next year, with a target on your head."