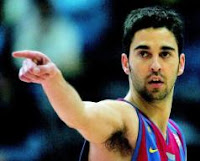 Buenos noches optimistas! It turns out that after careful consideration with folks not from America, Juan (not Juwan) Carlos Navarro, aka "La Bomba," brilliant second round selection of the pre-Grun-trust era who has been dominating the Euro-league ever since, is finally ready to come over and play real life basketball that actually counts! We had already noted how the Grun-trust fortified the once desperate reserves with newly minted draft picks from both this year and last, and now with the addition of Navarro, with his slashing-to-the-hoop teardrop dubbed la bomba for its resemblance to exploding point totals in tow, will be the cherry on top of this proverbial Spanish fried ice cream of a team. Now that the forever asterisked 2006-07* has been forgotten by all of us, we can truly look forward to a season next year of developing youngs, prolific bigs and redeeming all-stars ending in a Eastern Conference title or bust.

Navarro may not be known to many over here where basketball actually matters and isn't an outlet for pretending to be fouled, but at Barcelona, he is a perrenial all-star guard, whose offensive game is top notch. He has been named Euroleague MVP, has been named to the Euroleague first team multiple times and presided over the Spanish World Championship team that took home the gold medal last year after brilliant American coach Mike Krychyzsky decided that Gilbert Arenas didn't belong alongside the Nike shills. Even if Coach K's decision was ultimately painfully and hilariously wrong (kind of like his decision to recruit and start Gregg Paulus), and America wasn't delivered their championship as a result, the talent in Spain should not be discounted. Navarro started as the two-guard throughout that competition and he averaged around 14 ppg against many NBA players, even Dwyane Wade, who was busy saluting an imaginary flag in lieu of playing defense.

Navarro had been festering over in that inferior league for so long because his original contract with FC Barcelona was so enormous (yes Juwan) that under NBA rules, he could not opt out of it. See the NBA has this policy when it adopts neglected foreigners into their superior facilities where they can only offer a little tiny bit of money to the player's original team in exchange for rescuing that individual from unfit areas of basketball expression. It is then up to the player to make up for the rest of their contract. FC Barcelona, sensing how important Navarro's wispy beard and prodigious three point range was, signed him to a contract that could never be made up for with the wimpy NBA exception. It would have to be up to Navarro to pony up the rest of his 20-million coins with holes in them per year in order to join the Wizards, as he has routinely desired. Now, after a diplomatic, almost NATO-esque treaty agreement, Navarro was let out of his contract and allowed to come stateside.

Having procured this information from the insanely valuable (yet equally insane) realgm.com, I expected the trade ideas to start bubbling like baking soda mixed with cocaine, and I wasn't wrong. According to some, this is the first key to landing Kevin Garnett (or Theo Ratliff, not that much of a drop-off, right?)! However, the DCO believes that Juan Carlos' place is here in the District. Represent Spain in a land filled with representers of other countries and other states. Play on a team destined for the NBA Finals after a season lost in the wrath of god. In fact, on La Bomba's website, he has a list of NBA teams he asks his faithful to choose he play for. Already the Wizards stand atop the team rankings, and the DCO asks you, people of the land of democracy, to vote early and vote often on this very scientific poll, for Juan Carlos needs to know where he belongs!

Posted by Bobtimist Prime at 8:55 PM

Defense? With Pech, Dray and Bomba hopefully developing, 12ppg off the bench from Young Wun, Gil, Tough Juice and AJ doin their thing....our defense is fine as is baby.

By the way we are down on the polls, some numbnut cousin-dating rednecks from Memphis are stacking the Grizz vote. Get out and VOTAR!

Damn that poll. It's all Pau's fault that Memphis is leading. That just means we need to land him, too.