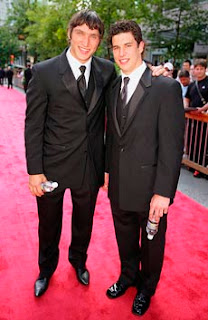 Rest assured, this will be the only piece we ever post with the word "Crosby" and the phrase "good for Caps" (excepting extreme circumstances involving early retirement, the dissolving of the Penguins franchise, an unlikely trade, or a move from Mario Lemieux's house to Jaromir Jagr's). With that in mind, let’s look at the good fortune Washington reaps from Sid’s new 5-year, $45 million contract.

If Alex Ovechkin’s cryptic “it’s a little bit secret” response to questions about a contract extension (plus pure common sense) is to be interpreted to mean the Caps are in negotiations to extend his soon-to-be-expired (after this season) rookie contract, we can assume that both parties are looking at comparable contracts around the league. Before today, the only close benchmarks were the gratuitously overpaid Daniel Briere (8 yr./$52M), Chris Drury (5 yr./$35.25M), and Scott Gomez (7 yr./$51.5M).

While Briere’s contract may not be completely ludicrous (if you have a fetish for diminutive centers who specialize in doling out cheap spears while hiding in the comfortable shadow of a defenseman twice their size), the Rangers giving out $7 million+/year contracts to a pair of guys who didn’t top 70 points last season was at the very least a disturbing harbinger of future contracts (will the likes of David Vyborny, with his Gomez-like numbers, demand similar terms in future negotiations?). The Crosby Precedent, with it’s $9 million/year average, presumably puts a reasonable limit on individual player salaries in a way that the ever-rising NHL cap cannot.

With a comparable contract at last in place, the Capitals can safely offer Ovechkin a fair-market deal before he becomes a restricted free agent next summer. With the jilted Kevin Lowe’s ridiculous offer (since matched) to Thomas Vanek as a potential benchmark, RFAs may not be as unattainable to a deep-pocketed (or desperate) team as they used to be. It’s not hard to imagine the Rangers or a like-minded-and-financed team making an equally over-the-top offer to Ovechkin next July, which the Caps would then have to match (or lose their franchise player, then their already tenuous fanbase, then their franchise), to the likely detriment of the rest of the squad. The NHL “cap” on individual player salaries (no more than 20% of the total salary cap) is no protection against such a thing. With the team cap rising from $39 million in 05-06 to $50.3 million only two years later, it’s not hard to envision a “cap” of $11.5 million+ or more for individual players within a year or two. It’s a salary that our friends in New York, Philadelphia, Detroit, or Toronto would be more than happy to provide, probably with an insanely front-loaded contract.

In the end, Crosby may have saved the Caps a few million dollars over the next several seasons, enough to put another Viktor Kozlov or two on the roster. So thanks, Sid (also the only time such a phrase will appear), for restoring some relative form of sanity to the league. Too bad your submissive servant Commissioner can’t do the same.