One Piece Acquired. More on the Way? 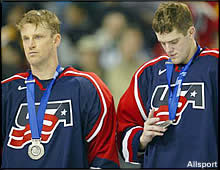 Tom Poti has joined the Capitals. Here he is pictured (right) wearing silver, no doubt a warm-up for lifting silver. While he may not technically be that ever-elusive-and-sought-after #1 elite defenseman (it's only Day 1 of free agency, so don't panic), he is a nice acquisition. He has the offensive potential of Brian Pothier, with a few extra inches and pounds. He's Sergei Gonchar with a few less flashy goals but a greater defensive conscience. Overall, a nice compliment to Pothier as a powerplay point man and to Milan Jurcina as a throw-your-weight-around crease-clearer.

Briefly looking at other NHL news, we have the answer to the question: Who will overpay for a smallish groin-spearer? Who else? The curiously front-loaded contract from Philadelphia gives Briere $10 million this coming season, which should work out to about $1 million per cowardly penalty. Speaking of overpaying, the Rangers have apparently signed Scott Gomez and Chris Drury. Gomez at 7 years, $51.5 million. One can only imagine the gaudy number$ Drury pulled down (update: five-years, $35.25. Why?). In any case, it's nice to see Briere land in Philly, where we can continue hating him unabated.

But back to the Caps, who have learned what kind of bag ridiculous overspending can leave you holding, even if the Rangers have not. The gluttonous center-grab by the Rangers leaves Michael Nylander nice and available. It was a shame to see him leave the Caps those long few years ago, and it would be great to have him back. Plus, he's Swedish! Like our new Calder-Trophy-leading-candidate. What could be more perfect?

The other rumor out there involves the forgotten Alexi Yashin. Whether he figures seriously into the Caps' plans or is just a fall-back is unknown, but DCO would applaud his acquisition as one with great proverbial upside. Plus, it would give us the opportunity to ask more pressing questions about the new uniforms. Specifically, can he fit that turtleneck under it? Will he have to buy one in a new color, or will his Islanders-blue one work well enough that we wouldn't notice?

So leave the Rangers and Flyers to gorge themselves yet again on big names with big price tags that lead to early playoff exits or no playoffs at all. Give us Poti, Nylander, and possibly Mike Comrie, and possibly Scott Hannan.

We need some stylish and comfortable accessories such as christian audigier
. Thousands of celebrities and ordinary folks are slowly discovering the artistic impact of the ED Hardy Shoes
on their lifestyles. The hardy shirt
casual clothing line was derived from the designs and creations of master tattoo artist hardy shirts