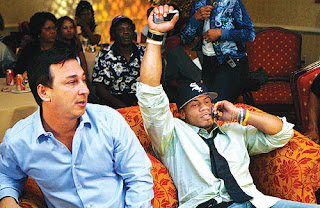 It has been a few days since the Annual NFL Player-draft, and it is time for the "so-called experts" to start handing out their grades. In this time-honored tradition, people who have very little comprehension of the sport of football offer their take on the business practices of multi-million dollar corporations, mainly to entice screaming matches on cable television. This year saw the Redskins missing many of their picks due to a few productive (as opposed to few productive) trades that bolstered their roster in years past, making their haul a little lighter than most other teams. It was for this reason that many of the "draftnicks" slammed the braintrust triumverate of Coach Joe Gibbs, VP of player personnell Vinny Cerato, and owner Daniel Snyder.

Maybe you too have seen this compendium of draft graders and thought, "Wow, if a consensus of this sort exists, than the Redskins' draft surely must have been counterproductive." However, we here at the DCO have thoroughly examined each of the Redskins' newest draft picks, talking with talent scouts, agents, NFL personnell and draft plaudits (well, we googled), and we have decided that this draft was bountiful, and will receive a solid A+. Lets go over the players shall we?

First Round, #6 overall. Safety Laron Landry, Lousiana State. We have already mentioned why we think he was the correct choice, but lets dig deeper into the Redskins bold selection of a second top-10 overall safety a bit. In recent profiles, Landry has shown a penchant for flying around, always a good safety quality. He has yet to be arrested. Also a great quality in first-round draft selections. And of the four safety selections in the first round, it was Landry who ranked highest. It is obvious to us that the safety position is revolutionizing the NFL and teams are seeing the need to add gamebreaking athletes into that position. Couple this with the fact that Gregg Williams uses the safety in a unique, almost genius manner by assigning boxes to each player, and you can see how the Redskins were clairvoyant in their move. Even Jason La Canfora, never one to back down from blasting the organization, has been convinced, of course it took a college kid in Australia to notice, but at least the point that drafting from an admittedly weak class of defensive lineman was not the answer. To sum it up, bravo, braintrust! 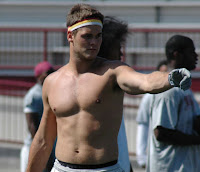 Fifth Round, #143 overall. Linebacker Dallas Sartz, Southern Cal. While not having a preferred nomenclature and possibly being racist, Dallas Sartz looks to be a fantastic steal in the fifth round. Great measurables, a fantastic collegiate background, and a versitility that this defense demands make Sartz a guy who ought to transcend special teams to day-to-day action in a hurry. And given the Redskins linebacking core's penchant for not making any thing resembling a play last season, his addition is welcome.

Sixth Round, #175 overall. Linebacker Horatio Benedict Blades, Pittsburgh. With a totally awesome video game name, (sounds like an Ice-Hockey player) H.B. is one of those smallish, glue guys who simply make plays. A Benarik and Butkis finalist and All-America, Blades stood out in Pittsburgh. Check out this career wrap-up:

He finished fourth nationally with 147 tackles last season and ranks third all-time in school history with 409. He was a three-time, first-team All-Big East selection and was named 2006 Big East Defensive Player of the Year.

Whoa. Check out that wicked afro too. I'd also say this was a steal. 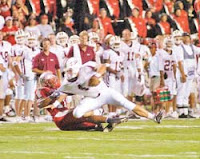 Sixth Round, #205 overall. Quarterback Jordan Palmer, Texas El-Paso. The bro of Bengals' QB Carson Palmer, and not related to hilarious Canadian former-Giant Jesse Palmer, aka the Batchelor, Jordan Palmer looks to be a solid clipboard holder for years to come. Sporting good size (6'6"), good numbers (851-of-1,427 passes--a 60 percent completion rate--for 11,084 yards, 88 touchdowns and 64 interceptions.), and obviously a great pedigree, "JP" ought to be the prototypical superstar quarterback brother, unlike some other black sheep.
Seventh Round, #216. Tight End Tyler Ecker, Michigan. Another big (6'6") dude from a big school, Ecker looks to be a blocking tight end and according to Gibbs he will, "have a chance to make our team." High praise coming from coach, who has had his share of difficulties with tight ends not named Chris Cooley. Lets just say, this guy won't be crying in the locker room for dropping three passes in a crucial game.
See, with all of these steals in the draft, coupled with one bonafide stud, the Redskins receive the highest possible draft grade.

Posted by Bobtimist Prime at 12:21 PM

guess what? that black sheep with the really good older brother quarterback crapped on the skins and won a super bowl AND an mvp. suck it skins